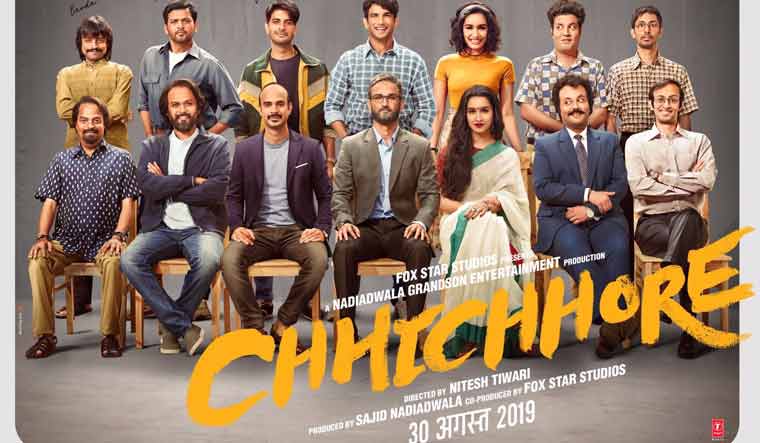 A tragedy is often followed by the process of revisiting memories. An album, lying in a cranny, comes out when Anirudh’s (Sushant Singh Rajput) and Maya’s (Shraddha Kapoor) teenage son, played by the wonderful Mohammad Samad, is battling for his life. Fear of being called a loser after failing in an entrance exam pushed him to the brink of committing suicide.

The photographs in the album tell many stories—of friends and college life. One photo, in particular, has six happy guys wearing tees with alphabets that combine to read “losers”.

Chhichhore, directed by Nitesh Tiwari, is a film that emphasises on how there should be a plan after losing too, like there is in anticipation of a victory. And, that germ is phenomenal. The movie, not that much. It falters and struggles at times to keep that thread alive even when it has a clever narrative that oscillates between Anirudh’s and Maya’s college life two decades ago and the current times.

The film seems like a cross between 3 Idiots and Student of the Year. The now divorced couple call their college friends as they surround their son to tell him that losing is not that bad. Every boy in the gang, living in the H4 hostel of a reputed engineering college of Mumbai, has nicknames with a funny story behind it. Like Sexa (Varun Sharma) has been named so because he is always thinking about sex, Acid (Naveen Polishetty) has a lot of anger and frustration within him, Mummy (Tushar Pandey) is a mumma’s boy, so on and so forth. And while these young guys are having a time of their life in the college, they have a challenge ahead of them. Their hostel wing has been termed losers as never in the history has the wing won any GC (general championship).

But this time around, Anirudh, along with a final year student Derek (Tahir Raj Bhasin), puts up a fight to win it and is joined by the other boys in the hostel. They have tough fight with wing H3 that has Raggie (Prateik Babbar) as their leader, the typical bully in the college. In fact, each character is a representation of a type—the bully, the comic, the drunk, the romantic, the eccentric—that can be found in almost every college film ever made. However, what’s noteworthy is that even when there are considerable jokes on sex, it is not degrading to a point the way 3 Idiots did with the 'balatkar' joke. What is problematic is that there is no female voice to bring symmetry to the story written by Tiwari, Piyush Gupta and Nikhil Malhotra. Shraddha Kapoor’s Maya is too muted to register as a strong character in the film.

As they take up the challenge, Tiwari, who had a winning streak in his last film Dangal, designs sports scenes that are applaud-worthy. While the boys in the audience cheer with one-liners that are funny and smart, the edginess in the sports stand out. Clubbed with quirky songs like 'Control' and 'Fikar Not', composed by Pritam and written by Amitabh Bhattacharya, the film has its winning moments. It is, however, pulled down by a plot that gets predictable with every passing minute.