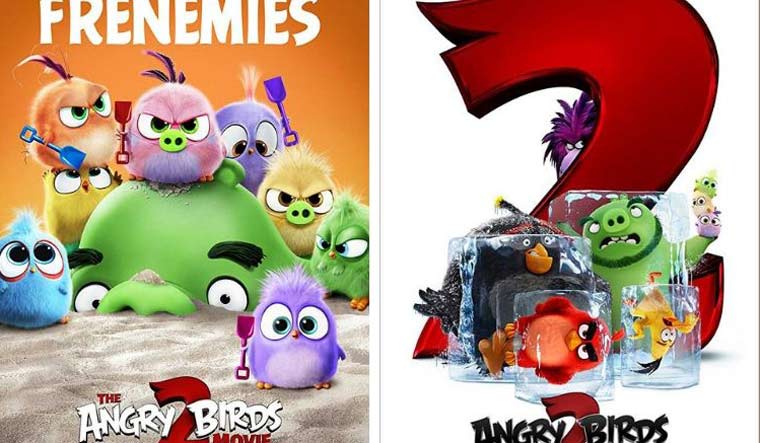 Honestly, this was not as bad as it could have been.

After the largely panned first Angry Birds movie, the sequel is refreshingly funny and, learning from its past mistakes, has eased up in the ‘mind numbing idiocy’ department. To be fair though, it did not have much to live up to.

In Thurop Van Orman’s directorial debut (John Rice was co-director), the plot once again follows the exploits of Red (Jason Sudeikis), Bomb (Danny McBride), Chuck (Josh Gad) and the whole gang as they must team up with the hated Pigs to face off against a new threat – a big purple Eagle and a superweapon launching ice covered lava balls into their home islands.

After the events of the first movie, Red is a hero and he is loving every minute of it. They have billboards and schools in his name and he soaks in the adulation like a warm bubble bath. His new role as chief anti-pig propaganda instructor and protector of Bird Island is threatened when Leonard (Bill Hader), his nemesis from Pig island, seeks a truce from the incessant prank wars between the two islands in order to stop Zeta (Leslie Jones) from carrying out her dastardly plan—using Pig and Bird Island for inhabitation instead of the icy Eagle island she currently lives in. Consequently, the island inhabitants must be wiped out to finally achieve an existence where Eagles do not have to restrict their playlists to Ice T and Ice Cube. So now it is up to a ragtag team of Birds, Pigs, and one cowardly Eagle to stop her.

While it does deal with relatable themes like rejection, right from the get go, the film makes no pretense about having deep moral values or the intricate subtleties of say, a Toy Story 4. This was marketed as a children’s movie, and a children’s movie it is. The audience will take their conventional plot lines and silly jokes, and they will like it.

Indeed, sometimes it feels like the writer’s room for this project had a strict ‘there are no bad ideas’ concept, spawning situations like a full five minutes devoted to a scene at a urinal where an eagle tries to pee in peace while three pigs and three birds pretend that the giant bird costume that they are manoeuvring is peeing as well. And that is the tip of the iceberg.

The cast is a veritable who’s who of SNL cast members (past and present), YouTube stars, and other famous figures, littered with names like JoJo Siwa, David Dobrik and Pete Davidson. All their voices fit their roles with ease and comfort although one can’t quite pinpoint any standout performances. With the addition of Sony to this sequel, the animation has been kicked up a notch as well. It must also be mentioned that the film score by Heitor Pereira heavily featured snippets from vintage gems like Eye of the Tiger, Final Countdown and Lionel Richie’s Hello, possibly to placate adults who had to accompany their children to a movie clearly targeted at them and them only.

At the end of the day, Angry Birds 2 is a fun filled, loud (in every sense of the word) movie, highly recommended for scoring brownie points for theatre visits with your kids. Or playing it for them on TV while the adults spend two hours in peace and quiet. Either way, this film is definitely much better than the sequel of an animated movie based on a mobile game has any right to be, and that is commendable.