'Article 15' review: Ayushmann breaks the mould in a gut-wrenching film

The film questions you and horrifies you, while maintaining rationality 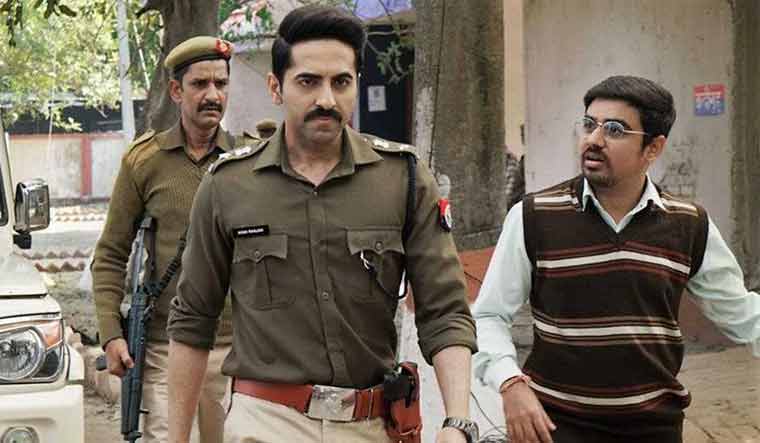 Almost 15 minutes into the film, in a scene in Article 15, the newly-posted superintendent of police, Ayan Ranjan (Ayushmann Khurrana) wants to share food from the plate of one of his subordinates, Jatav (Kumud Mishra). The latter is hesitant and uncomfortable with the idea, while some of the other colleagues prod him to get another plate for the boss. Ranjan, however, hasn’t read too deeply into what just happened.

Son of an IFS officer, Ayan grew up mainly in Delhi and very many parts of the world, oblivious to what caste-discrimination really looks like, mostly romanticising and taking pride in India, its culture, heritage and Taj Mahal and Khajuraho. For how long can he remain ignorant though? Not long. Not while being posted in the interiors of the country, which appears only on “page seven” of the newspapers; from where if you take right, you reach Ayodhya; if left, Lucknow; and a straight route leads to Kolkata—all of them and everything in between being the hotspots of politics.

He cannot remain oblivious also because caste discrimination is not being practiced in hushed up tones, like in the cities, but in the open. Here, people are open about their prejudices. There is no embarrassment and no guilt. Ayan’s driver refuses to buy a bottle of water from a particular area because people from the Scheduled Caste live there. Another refuses to perform his duty, which includes cleaning up a marsh, because again it is in an area occupied by the SCs. And, it goes on.

Directed and co-written (along with Gaurav Solanki) by Anubhav Sinha, who seems to have rediscovered cinema with Mulk, Article 15 (this time also with less preachiness and focus on a streamlined story) is not the most comfortable film. Inspired by the rape and hanging of two young girls in Badaun village in Uttar Pradesh in 2014, the film which borrows its title from an article in the Indian Constitution that encourages equality, the film prods you, questions you, shocks and horrifies you, while still maintaining a rationality in the narrative.

The film does not look at the caste structure of the village from a single point of view, but gives ample opportunities to go deeper and understand it from the perspectives of different people representing different castes, letting the audience into a world that they may not have seen before, the problems of today and their roots. A low-caste Jatav’s inclusion into the police force with an upper-caste Brahmdutt (Manoj Pahwa) scrutinises the pervasiveness of caste in the workforce. While in Gaura (Sayani Gupta), we find a fighter from the lowest echelons.

For Sinha’s protagonist to be a deracinated Brahmin, unaware of the deep-rootedness of the caste system, does two things—puts him in a spot to either go with the flow or change things for better, and when he chooses the latter, it gives him an upper hand to bring about change. He is not the victim here, like we have seen the protagonists of the very few recent films, like Aarakshan, Sairat, Masaan, Kaala, raising the issue of casteism. He is the one that stands with the victim and fights for them, while also having a voice that people listen to.

Two hours before watching the film, I came across a news report that said a police officer in UP had refused to file an FIR for a rape. It is nothing new and not an one-off thing. We come across such reports more often than imaginable. The backdrop, of an investigation into the rape of two women, is not just pertinent but very urgent, too. It unmasks the demons of the system, ensures that the white, black and grey of the socio-political setup comes to the fore. In the process, it maintains a pace that is engaging and explores a subject that is heartbreaking and gut-wrenching. Club it with the rousing background music by Mangesh Dhakde and the experience only elevates.

That the film does not isolate itself to discussing only the caste is something that works in the film’s favour more than expected. In its little ways, there are too many intricate details. A young female doctor’s despair to come out with the truth in a system crammed with bullies trying to make her work in their way; orthe hopelessness of a man who lagged behind in his public service examination and settled for a lower job only to meet his classmate Ayan who is on the top of his game and be discomfited for no reason, are things that layers the story.

And then it is Ayan, who has had a good and privileged life. He is trying hard to be the best version of himself and bring out the best as a cop, and yet, he feels a sense of insignificance in front of Nishad’s (Md Zeeshan Ayuub) revolutionary. The uniform has not given him a sense of entitlement. Is it because he is still new in the system? Well, could be. But for now, all it takes it is one person like him to change a few people if not all.