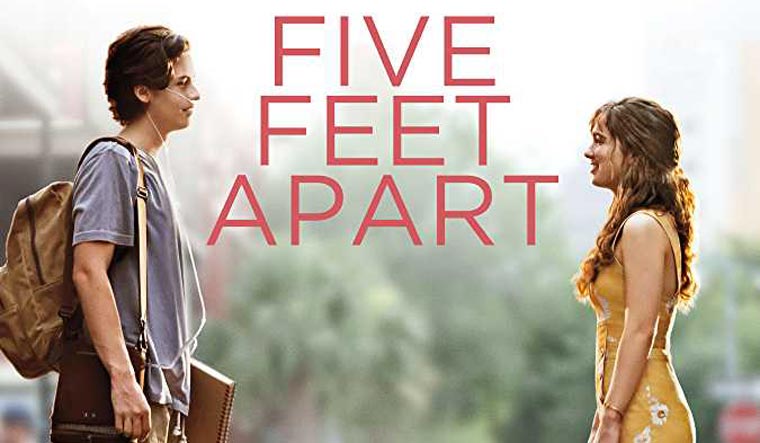 After A Walk To Remember graced screens way back in 2002, cine goers were offered an array of similar movies—Fault in Our Stars, followed by Me Before You, Everything, Everything, and Midnight Sun. Considering this, one would be inclined to think that Hollywood may have reached the saturation point with regards to tragic love stories of star crossed, devastatingly attractive, (mostly white) young people with serious illnesses.

Helmed by debutant director Justin Baldoni (of Jane the Virgin fame), the movie follows the lives of Will Newman (Cole Sprouse) and Stella Grant (Haley Lu Richardson), who both have cancer leukaemia photosensitive disorder Cystic Fibrosis. Through convenient exposition from Stella’s YouTube channel, the film tells us how CF means that the body produces ‘a shit ton of mucus’, which clogs the lungs and can be life threatening. What is worse, those diagnosed with CF are advised to stay ‘six feet apart’ at all times to reduce the risk of contracting each other's infections. Why the five feet then? The movie does provide a reason for it, although not a very convincing one. Anyhow, this rule is followed throughout the film, although the extent to which the characters mostly rely on mental estimates of how much distance constitutes six feet seems more than a little dangerous.

Stella is cheerful and warm, determined to make the best of her circumstances, and Haley Lu subtly blends resilience with resignation to strip back the optimism to reveal her frustration and fear. And although introduced as a typical rebel with distinctly Jughead-esque sarcasm and artistic expression, Sprouse’s Will is just the same as Stella underneath it all – someone faced with their mortality on a daily basis. Sprouse is joined by his fellow Disney star Moises Arias as Poe Ramirez, Stella’s gay best friend and fellow CF patient in that order. All three of the actors bring a tired vulnerability in their portrayals that goes beyond what the patchy screenplay (by Mikki Daughtry and Tobias Iaconis) demands of them. Although on second thought, the tiredness could also be from the burden of carrying the entire movie on their shoulders while the plot does its own thing.

Kimberley Hebert Gregory fills the role of the adult as nurse Barb, while Claire Forlani, Cynthia Evans and Gary Weeks do not have much breathing room in their almost non-existent roles as Stella and Will’s parents. The score by Brian Taylor (who scored the Avengers) and Breton Vivian is classic YA fare, complete with pop montages and blaringly obvious audio cues dictating emotion.

Five Feet Apart is definitely commendable for its realistic depiction of the daily lives of those with Cystic Fibrosis. However, there is debate about whether to be happy about the all the much-needed representation, or be annoyed that this was the representation.

All in all, it depends on what the movie wants to highlight in its portrayal. Should the fact that the protagonists suffer from illnesses demand a ground-breaking narrative about how their story is so different from everyone else? Or should it show that theirs is a love story like any other, just that they are both sick in this one? Too many movies have tried the former, and this one falls right in the middle—a well-acted but formulaic film that one can enjoy with a lot of ice-cream on a rainy day.