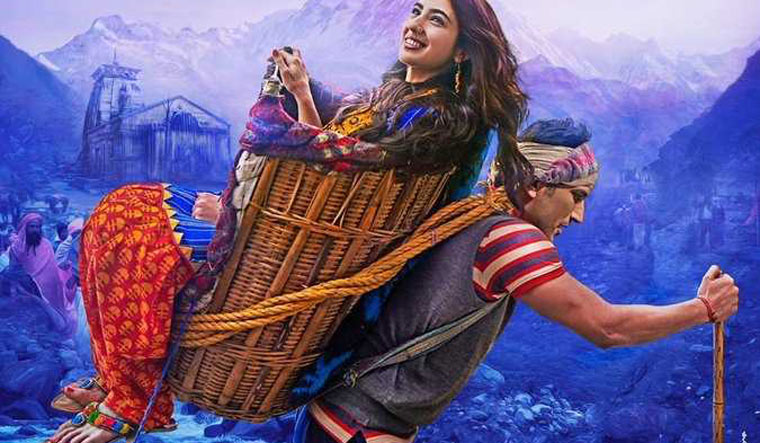 During the course of watching Abhishek Kapoor's Kedarnath (tiringly long at 145 minutes), one thought that stayed with me throughout was about reactions of the characters to mundane, cliched situations. I wondered why parents of a star-crossed couple in a Bollywood romance never have a new perspective, or a new suggestion for their kids who are madly in love. Or, why is it that the only solution handy is to get the girl forcibly married to another guy while she tries to get away—either elope (which is rarely successful), or attempt suicide.

That is what Kedarnath is all about. Though set in 2013, it seems stuck in the 60s-70s. Mansoor (Sushant Singh Rajput), a pithoo (human carrier) in the hills of the pilgrimage town, Kedarnath, and Mandakini or Mukku (Sara Ali Khan), from the family of head priests in the area, meet and fall in love. From different faiths, there ought to be a problem. But this one love story, in a town believed to be occupied by peace-loving people, is enough to wreck havoc amongst the two communities. The larger problem is that the differences shown, very melodramatically, lack nuance and depth.

And if the storyline sounds too familiar, it is! There is nothing new. Maybe, except, that it is the debut of Sara Ali Khan, who starts awkwardly but is mostly pleasant. And, also the fact that the backdrop of story is the 2013 Uttarakhand-Kedarnath mishap. But can a natural calamity as the backdrop really make a story powerful and riveting? It could have. Probably, if the writing really weaved in the effects of the calamity more closely.

The landslide and the flood that took more than 4,000 lives (with many still missing), however, seems more like a canvas to play out the photography (scenic in the first half and devastating in the latter) in the background. The uneven VFX, however, kills that as well.

It reminds one of Tum Mile (2009), which was a love story set in the times of deluge in Mumbai, but fell flat because of lack of depth in writing and editing.

In Tum Mile, at least, the songs were good enough to remember even today. Here, the composer-writer duo of Amit Trivedi-Amitabh Bhattacharya could not do justice to a love story. The only stand-out song is Namo Namo. Qafirana... clicks to an extent. But then, there is a lack of chemistry between the lead couple, even after good individual attempts, and the song cannot help in elevating it.