Bohemian Rhapsody review: A flawed tribute to a mercurial hero 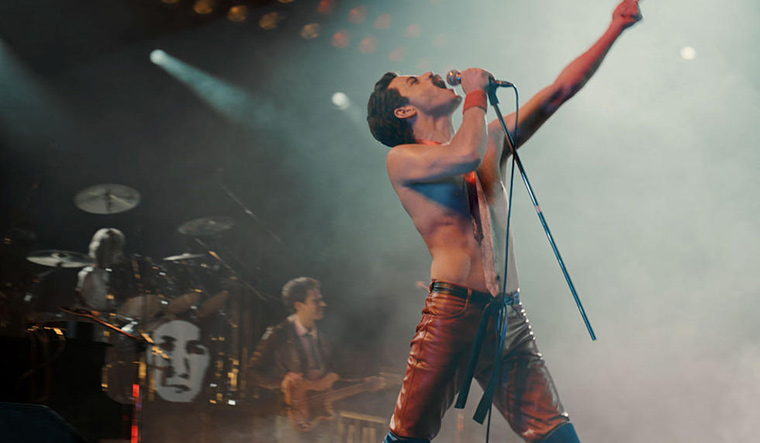 A scene from 'Bohemian Rhapsody'

From deep slumber, a pair of black-brown eyes jerk wide open. Fear and apprehension, the helplessness of a child caught in a looped nightmare, were writ large. Dry coughs. The scene quickly shifts backstage, where a muscular man in signature white tank top tightens his shoulders, performing marching stretches with the suppleness of a ballerina, and the intent of a boxer levelling his knockout punch. It was the Live Aid concert of 1985, a 25-minute-long tour de force performance, broadcast worldwide to over a billion viewers, that cemented his place in music history.

The opening scenes of Bohemian Rhapsody pay a tribute worthy of the enigmatic rock n’ roll legend, performer extraordinaire, and Queen frontman Freddie Mercury. It was not a caricature minimised to his gigantic buck teeth and signature overbite, or the “exotic” facial contours of his Persian ancestry. There was Mercury reeling under the weight of AIDS, and there was Freddie in all his outward flamboyance, within the alienated, confused and tortured eyes. In Rami Malek’s toned physicality, and the feline, effeminate quality of movements, Mercury is reborn.

Born Farrokh Bulsara in Zanzibar, then colonial Tanzania, his family—of Indian Parsi origin—moved to Mumbai, where the youngster was schooled. There, he got his first piano lessons, and played with a band The Hectics, before finally moving on to settle in London. He joined a local band named Smile, and, with guitarist Brian May (Gwilym Lee) and drummer Roger Taylor (Ben Hardy), went on to discover Queen. It marked the beginning of a stormy, drug-addled, sex-ridden saga; he burnt both ends of the creativity candle, questioned his own sexuality, mainstreamed outrageous fashion statements, and finally succumbed to a disease that had gripped the then recently decriminalised Britain’s LGBT community. By any metric, it was a life with more than its fair share of ups, downs and drama, something that would not lend itself to a two-hour feature film interpretation.

Director Bryan Singer, who was later replaced by Dexter Fletcher, does a remarkable job on many counts. Sexuality was one of the most contested, personally kept secrets of Mercury, but the film does it justice. In the film, Mercury informs his then wife Mary Austin that he is bisexual. His gay relations are downplayed on screen, and his reactions to media’s probing questions punctuated with his trademark derision. On the downside, Rami Malek is no Freddie Mercury doppelganger. The film fails when it comes to dissecting the nuances of his troubled mind. His brief Indian tryst, which Mercury seldom spoke of, but which I personally maintain sub-consciously influenced his long, sustained vibratos, are completely given a pass.

But, where Malek’s Mercury shines is the authenticity of performance, capably mimicking the unpredictable movements of his extemporaneous counterpart. On stage, Mercury dripped swagger. He gyrated and covered large swathes of the stage in brisk movements, swinging a broken mike stand like it was a Jimi Hendrix Stratocaster. But, in this foot-stomping, uplifting, occasionally humorous, celebration of Mercury’s music, do not miss the forest for the woods. For, it is in the split-second details that the film sparks to life. In conversation, Malek’s Mercury shyly smacks his lips over his large front teeth, the involuntary reflex of a man called a ‘freak’ all his life for his facial 'deformities'. From the very beginning, there is a scattered, melodic build-up to their eponymous operatic magnum opus, Bohemian Rhapsody, a strange visual equivalent of Brian May’s guitar solos. Additionally, the film goes into the stories behind the genesis of the legendary ‘We Will Rock You’ beat and the infectious bass line of ‘Another One Bites the Dust’.

There are the forgivable oversights. The Live Aid show at Wembley Stadium in 1985, according to the film, was something of a long-delayed reunion between feuding bandmates, an aftermath of Mercury’s increasingly domineering attitude and decision to go solo. The reality is far from that: Others members of the band had already lined up their solo projects before Mercury released his, and the Queen had embarked on a world tour in the same year as the Live Aid show.

In the film, Mercury says to his new bandmates, after surprising them with an impromptu audition backstage after a gig: “I have four extra incisors and it gives me more vocal range.” It was common belief among Queen fans that Mercury’s considerably large vocal chamber was responsible for his virtuoso inflections, and tremendous range—estimated to be about four octaves. It was a debatable proposition at best. Latest studies have proven that he was a baritone who sang in tenor, and Mercury vocalised through his ventricular folds, a unique capability of Tuvan throat singers. It is highly unlikely that, in real life, Mercury mentioned his extra incisors as the reason for his range to his bandmates.

Then there are the unforgivable distortions. In Bohemian Rhapsody, Mercury comes out about his HIV infection to his teammates—an attempt to infuse more drama into the proceedings—a day before the Live Aid concert. Numerous historical accounts have proved this to be an outright falsehood. The first time he came out in public that he suffered from the disease, was the day before he died.

Bottomline, the film is a celebration of the music of Mercury, rather than a searing biopic of the life of the mercurial protagonist himself. In this sanitised tribute, a flawed hologram of your hero is rekindled on the screen. Worst case scenario, you waste two hours tapping your foot to some damn good music.