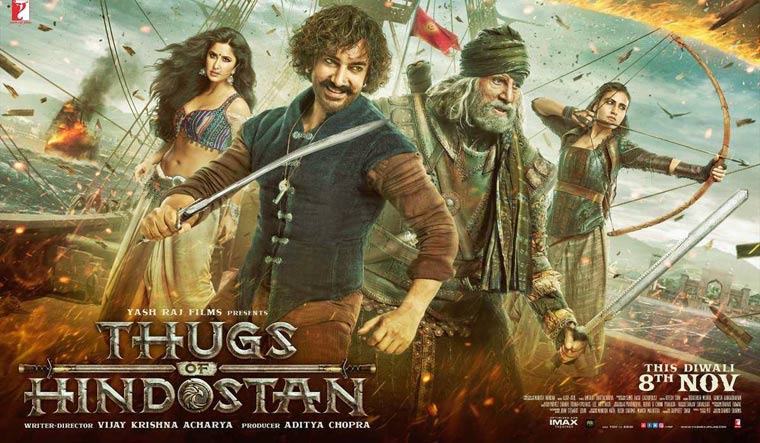 Two years in the making, Yash Raj Films’ blockbuster Thugs of Hindostan finally came out today. The hype surrounding this movie has been intense, considering several factors such as how selective Aamir Khan is with his roles, the sky-high budget, and the simple fact that a film where Amitabh Bachchan and Aamir Khan share screen space should be worth watching.

The plot revolves around the titular thugs—Amitabh Bachchan plays Khudabaksh aka Azaad, the grimmest (and possibly the only) Indian pirate that sailed the CGI seas. He valiantly leads his band of men against the suitably evil Clive (an appropriately red faced and sinister Lloyd Owen) and the East India Company. He is accompanied by Zafira (Fatima Sana Shaikh), princess of Raunakpur, seeking retribution for the wrongs of the Company. Overshadowing all of them is the unscrupulous, top hat-wearing, donkey-riding Firangi Mallah (Aamir Khan), who can be found in the meme hall of fame filed under 'dhoka swabhaav hai mera'.

The entire film sees Firangi cling on to that motto for dear life, as the plot takes too many predictable twists before it sails to its conclusion two hours and 45 minutes later. Aamir Khan seamlessly slides into the role of the triple- and quadruple-crossing trickster Firangi—a conman who refuses to be burdened by tiresome qualities like trustworthiness or responsibility—and gleefully keeps up a ceaseless patter of accent tinged jokes and antics. Amitabh Bachchan’s committed performance is definitely praise-worthy as well. The 76-year-old labours under the weight of his costume—reports say he had to take a break from filming due to armour-related injuries—but sportingly joins in dance numbers and executes stunts with dignified aplomb.

When she is not speaking, Fatima Sana Shaikh performs her role with due badassery, although we may yet have to wait for the character of an unstoppable Indian warrior princess that Bollywood lacks. Meanwhile, Katrina Kaif (as Suraiyya) wisely confines herself to about 20 minutes of what she does best—provide a multitude of gratuitous body shots, sultry one liners, and effortlessly slay Prabhudeva’s choreography.

An average script and editing by Ritesh Soni that was slightly sore on the eye serve little to bolster the film. The repetitive, soap opera-esque score by John Stewart Eduri and mostly forgettable music by Ajay-Atul do not help much either. The cinematography by Manush Nandan is commendable, as is the sheer extravagance of the locations and scenery in the film. One can certainly see where the 300 crores were spent, but not why.

Aamir Khan in an interview had stated, "I hope after watching this you will forget about Jack Sparrow". If anything, this film only bolstered the memory of the swashbuckling pirate in our minds. The film will probably perform averagely at the box office. And while a Firangi will never replace a Jack Sparrow and a Clive will never replace a Captain Andrew Russell (from Lagaan), Thugs of Hindostan is what it is—a fun family watch.