William Neuman was 'The New York Times' correspondent in Caracas 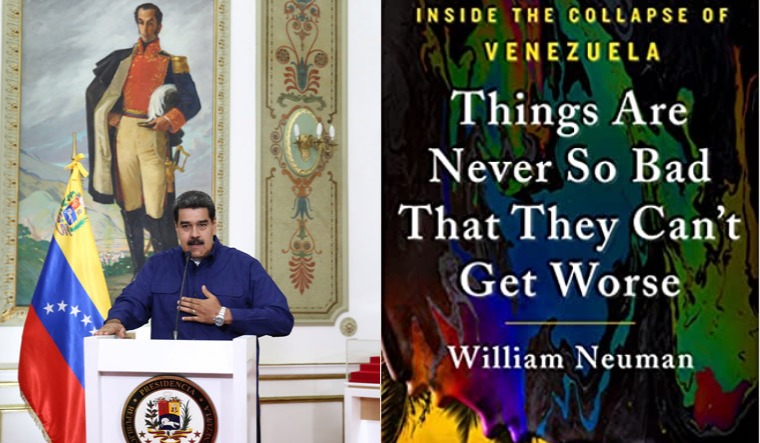 William Neuman, who had spent four years from 2012 to 2016 as The New York Times correspondent in Caracas during the peak of the Venezuelan crisis, has diagnosed correctly the reason for the Venezuelan political and economic collapse. He says, “It’s not so much that Venezuela produced oil; it’s that oil produced Venezuela.” Oil has played not only an economic role but has also shaped the politics and culture of Venezuelans, which has led to the current crisis.

Before the discovery of oil in 1914, the country was relatively obscure except for the fact that it was the land of Simon Bolivar, the liberator of South America. By 1928, Venezuela was the world’s top oil exporter and the second-biggest oil producer, after the US. Since then, the Venezuelans lived off oil and have neglected other areas. The country has so much of fertile land, mineral resources, hydroelectric potential, beautiful beaches and pleasant climate. These resources are sufficient to be a prosperous nation, even without oil.

But when the easy money from oil started coming, the Venezuelans abandoned all the other resources and started living exclusively on oil income. During high oil prices, middle-class Venezuelans used to go for shopping to Miami and freak out on purchase of luxury goods. At the same time, the government also went on a spending spree and borrowed money recklessly from international capital markets. The corrupt politicians cleaned up the treasury and took money abroad in collusion with businesspeople.

When the oil prices went down, the governments struggled to pay foreign debt, cut down developmental and welfare budgets and imposed austerity. At these times, people rose in protest, leading to change of governments through elections or coups. Even Hugo Chavez repeated the same cycle and got the country into a large Chinese debt trap. He and his successor, Nicolás Maduro, mismanaged the economy, causing chaos with hyperinflation, currency changes and exchange value depreciations.

Neuman has visited many parts of the country and interviewed ordinary Venezuelans from different walks of life. He has filled up most pages of his new book—Things Are Never So Bad That They Can't Get Worse: Inside the Collapse of Venezuela—with the tragic stories of the misery and suffering from poverty, shortage of essential items, electric power cuts, crime, violence and corruption. These are, of course, well known at the macro level. Neuman has given names and faces to the victims of the Chavista misrule and mismanagement.

But Neuman gives new details on the self-proclamation of Juan Guaido as interim president and Guaido's involvement in the attempt to invade Venezuela from the sea with a bunch of mercenaries in 2019.

According to Neuman, Guaido’s proclamation as president was not based on the consensus of the opposition groups nor was it done properly. It was done by one of the opposition groups in a hasty collusion with the American officials. The proclamation should have been done in the National Assembly after proper notification. But it was done as a surprise in an outdoor event. Some of the lawmakers were taken by surprise and asked, “Why hadn’t the swearing-in been discussed and approved in advance by the full assembly? Why was it done on the fly, in the street instead of in the legislature?”

Within minutes of Guaido’s swearing himself in, the White House issued a statement from president Donald Trump, recognising Guaido as interim president. President Ivan Duque of Colombia, President Jair Bolsonaro of Brazil, and Chrystia Freeland, the Canadian foreign minister, were at the World Economic Forum in Davos, Switzerland; they called an impromptu news conference and, together, recognised Guaido as Venezuela’s president. A South American diplomat told Neuman that Washington’s insistence on going first put its Latin American allies in a bind, exposing them to criticism that they were doing the White House’s bidding when they recognised Guaido. The diplomat said, “People are going to say that they led us by the nose”. Guaido wrote in an op-ed in The New York Times a week later, “It was not of my own accord that I assumed the function of president that day, but in adherence to the Constitution.” But that argument failed to acknowledge the intense debate within the opposition about what to do and that there were other options under consideration, which were ignored under pressure from the neocon elements of Washington DC.

Neuman has interviewed US officials and Venezuelan opposition leaders and brings out details of the invasion attempt to overthrow President Maduro. According to him, the coup leaders signed a contract on October 16, 2019, to invade Venezuela. According to the contract, Silvercorp, a security company of an American mercenary, would be paid $213 million “to capture/detain/remove Nicolas Maduro” and, in his place, “install the recognized Venezuelan President Juan Guaido”. The contract—which was kept secret at the time—spelled out rules of engagement and identified targets (Maduro and others) that could be “neutralized”. It required foreign fighters to wear Venezuelan uniforms and cover their faces “to protect the face of the project as Venezuelan only”. The contract was signed by Goudreau, an American mercenary, and Rendon, a Venezuelan who was identified as the high presidential commissioner for general strategy and crisis management, as well as a Venezuelan legislator close to Guaido named Sergio Vergara, who had been working with Rendon. It was also signed by Guaido.

Goudreau made an audio recording of a videoconference he had with Guaido, in which they discussed signing the contract. In the recording, Goudreau asked Guaido if he had any concerns. Guaido gave a nervous laugh and responded, in English, “A lot of concerns, but we’re doing the right thing for our country.” There was discussion of the need to sign two copies of the document, in its English and Spanish versions, and to scan and send the signed contracts. At the end of the recording, Guaido has denied signing the contract. But it was negotiated and signed by his representatives and it would have had no validity without his signature—he is the only person named in the document as a party to the contract (his name appears twice).

But shortly after it was signed, the deal fell apart. The contract required the Guaido government to pay Silvercorp a $1.5 million retainer within five days of signing. They never paid it. Goudreau insisted on being paid. Rendon said that he gave Goudreau $50,000 to string him along. Finally, in early November, there was a blowup. Rendon said that he met with Goudreau and presented him with a letter cancelling the agreement. (It’s worth asking why the contract needed to be cancelled if Guaido had never signed it.) He said that Goudreau refused to sign the letter and stormed out. Goudreau accused Guaido and Rendon of backing out of their deal and he went public, providing images of the contract, with Guaido’s signature, to a Miami-based Venezuelan journalist named Patricia Poleo, who posted them online.

While Neuman has given a full account of the omissions and commissions of Chavez, he has ignored the fact that Chavez was a creation of his predecessors and opposition leaders. During the election campaign in 1998, Chavez asked, “Venezuela is a rich country thanks to oil. Why are so many millions… poor?” The poor voted for him and the middle class also supported him, desiring change.

The two large, traditional oligarchic political parties, which were in power for about fifty years, were routed completely. Thereafter, the opposition boycotted the elections, fearing certain defeat and getting discredited. This enabled Chavez to get a majority in the assembly, change the constitution and get away with so many authoritarian decrees and decisions, in the absence of effective opposition. The opposition ran away from electorally challenging Chavez and instead tried all kinds of unconstitutional and undemocratic means and conspiracies to overthrow Chavez in collusion with the local oligarchy and Americans.

In 2002, the opposition carried out a massive strike, stopping the production and exports of oil, endangering the vital oil revenue for the government and causing shortage of petrol and diesel. Chavez retaliated by sacking over 15,000 PDVSA staff and filled the position with loyal Chavistas. The opposition succeeded in removing Chavez from power through a coup in 2002. Many businessmen and oil company executives supported the coup. But the coup plotters mismanaged the post-coup settlement and cut out the military from the share of the spoils. So some of the generals did a counter-coup and brought Chavez back to power, releasing him from the island jail where he was imprisoned.

Chavez went on a spree of revenge. He started systematic destruction of industries and businesses and imposed controls and restrictions to teach a lesson to the business community. He placed military officers in civilian positions and allowed them to make money. The military became an accomplice and a stakeholder in the Chavista regime of chaos, corruption and control. When Chavez died of cancer, the Cubans influenced him to appoint Maduro as president. Maduro, who had political training in Cuba during his youth, was considered as a controllable asset by the Cubans. Maduro had no charisma or grassroots support. He could not control the different Chavista and military factions who were more powerful than him. So he could not take decisions or implement any policies effectively. This led to economic disaster with hyperinflation and devaluation of currency.

Juan Guaido has lost credibility now. He and his friends, along with American lawyers and lobbyists, have helped themselves to hundreds of millions of dollars of the Venezuelan government funds in the US banks seized by the US government. The American attempts for regime change have completely failed. Their ruthless illegal economic sanctions have worsened the suffering of Venezuelan people. The US government has even announced a bounty (ridiculous and outrageous even by American standards of arrogance and bullying) on the heads of President Maduro and other political leaders and military officials. But the Cubans have trained and helped the Venezuelans on how to survive the Yankee sanctions and isolation and CIA conspiracy attempts. Some of the western governments have started resuming dealings with the Maduro government and even the US sent an official delegation recently to Caracas for loosening of the oil embargo since the high oil prices have hurt US consumers.

The Venezuelan economy has turned the corner. The hyperinflation has come down to manageable proportions. The IMF has projected a 1.5 per cent GDP growth in 2022, after consecutive GDP contractions from 2014 to 2021.

So I believe that the worst is over. Venezuelans can expect improvement in their situation in the coming years. Of course, Venezuela needs a better government and that should be elected by the people themselves, and not imposed by Gringos or their lackeys.