'The Gorakhpur Hospital Tragedy': Kafeel Khan's memoir is a punch to the gut

In the immediate aftermath of the tragedy, Khan went from being hero to villain 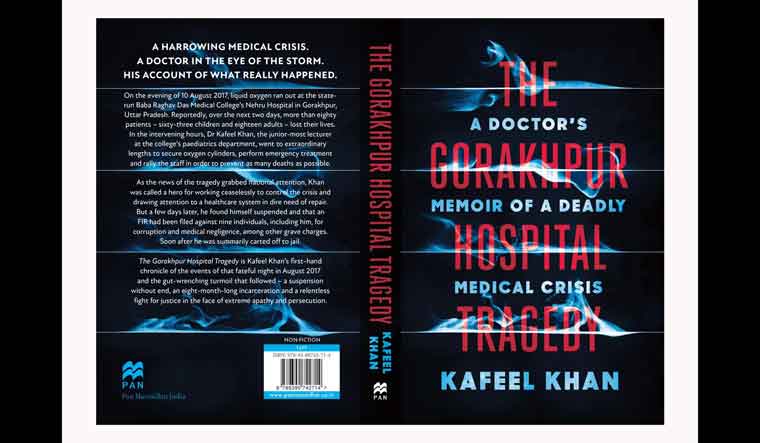 “Dekhta hoon tujhe…” those three ominous words were uttered by Uttar Pradesh’s then newly appointed chief minister Yogi Adityanath to Kafeel Khan, the junior most lecturer at the Department of Pediatrics at the Baba Raghav Das Medical College in Gorakhpur on August 13, 2017.

(In the book the three words are translated to ‘I will see it’, but the more apt version would be ‘I will see you’)

In what was then and has been since a widely reported news story, the supply of piped liquid oxygen to the medical college, ran out late evening on August 10. When supply was finally restored on 2.15 am on August 13, 63 infants and 18 adults had perished. The government has since maintained that no deaths happened due to lack of oxygen. It was a statement that would be made again in 2021, during the second wave of the COVID-19 pandemic.

The Gorakhpur Hospital Tragedy: A Doctor’s Memoir of a Deadly Medical Crisis written by Khan comes close on the heels of his termination from services in November 2021, after being suspended twice by the government. He was the only one so punished for the catastrophe.

The book offers a detailed look at what happened on the two nights and in their aftermath. The first is a tragedy common to medical crisis in our country, the second an unfortunate coming together of political targeting, media trial and administrative apathy. In both, there is no answer to the question: who must bear responsibility.

On August 10, Khan was on leave but chose to rush to the hospital when the message ‘There is no oxygen supply in NICU” (neonatal intensive care unit) beeped on a college WhatsApp group. The college’s principal was away on duly granted leave. The head of the paediatrics department and the acting principal, whom Khan contacted on the way to the hospital responded with “I will see” when he asked for their presence in the hospital to defuse the crisis. Over the night, other senior doctors would not receive phone calls or answer similarly.

Khan meanwhile made efforts to procure jumbo oxygen cylinders from private hospitals. He even persuaded the local unit of the Sashastra Seema Bal to loan a truck and jawans so that the maximum number of cylinders could be picked up from wherever these were available. He even paid from his pocket for these, and at one point handed over his ATM card for money to be withdrawn to pay for cylinders and to drivers of trucks. All these personal endeavours were to prove his undoing. So would a single statement he made on the stalled oxygen supply to the the media while running inside the NICU. It was perceived as drawing too much attention to himself.

Oxygen supply to the medical college, which serves eastern UP, and also receives patients from Bihar and Nepal had run out because payments to the vendor had not been made. The said vendor had sent reminders to the college to pay up, and in turn the college had requested the state government to release funds for the same but that had not happened. The funds that had been released had lapsed due to what would later be attributed to a ‘clerical error’. The manner of the oxygen supply itself was circuitous- with the medical college not procuring it directly from a producer but going through a third agency.

The government and the local administration were focused more on managing the perception of the crisis, as local media had got wind of it in the morning of August 11. This cover-up of the crisis included an unfortunate address to the media by the then state’s health minister which started with, “August mein har saal bachche marte hain” (children die in August every year)- referring to the mortality rate of children in a month when the number of encephalitis cases in the region went up.

In the immediate aftermath of the tragedy, Khan went from being hero to villain, with certain sections of the media pointing out that he had been part of the corruption that had held back the payment for the oxygen supply. The greater question raised on his heroics was the number of lives he could have saved by arranging just four or five cylinders. The truth was that he had arranged around 500 cylinders in 55 hours. Without these the tragedy could have been worse.

Khan’s description of the crisis is like a gut punch, despite many of its details being known. He uses dialogue to simple but deep effect, clarifying in his notes that they are “reconstructed” to the best of his abilities. He also puts a face to the parents who lived through those harrowing nights. A couple who had children after 13 years of marriage, another who had a daughter after four sons.

The questions that the harried parents asked then-“Can you bring back my child? Are you doctors or demons?...Who is responsible for my child’s death”- have remained unanswered.

On September 2, Khan was arrested by the state’s Special Task Force. He spent eight months in prison before being granted bail by the High Court. Twenty days later he was re-arrested-—this time for forcibly entering a hospital to treat patients and criticising the state government whose employ he was. On January 29, 2020 he was arrested yet again for a speech given at the Aligarh Muslim University on the charge that it would disrupt communal harmony. In the interim, he was suspended twice for medical negligence, corruption and dereliction of duty. Six inquiries absolved him of the charges. One committee held him guilty of private practice—which he had carried out only before joining the BRD Medical College.

The other chunk of Khan’s book chronicles his life inside prison, a grim picture which is given some levity by the description of fellow inmates, one a ‘mantri ji’ imprisoned for his role in the murder of a young poet.

At one point in the book Khan laments how he, a doctor who had told parents to be observant of milestone events in the lives of their children, himself missed out on these events in his daughter’s life. It is a poignant observation.

Throughout he writes about his family’s support for him, but also lets in a glimpse of how frustrating it was for them. He records moments of conflict on how to proceed—must one tell one’s version of events to the public or remain silent? At one point, his family was pushed to selling off household items to meet everyday and legal expenses. His younger brother was shot at in Gorakhpur- an event that was then described by some media persons as ‘staged’.

This is an important book, not only for the light it sheds at one event but for its focus on the country’s health system. It must be translated into various languages, with a sharper eye on editorial consistencies such as the listing of sources.

After his release from jail, Khan offered his services voluntarily in multiple states- from Assam to Kerala, noticing many common strands from the absence of routine medicines to the acceptance of preventable diseases among children. To many of us it might seem strange, as it indeed would have been to Khan who describes himself as “a relatively privileged, nonchalant person” who could not go without an air conditioner on most occasions.

It also calls into question the role of the ‘majoritarian’ media hungry for government approval which made much of Khan being a Muslim and thus a potential terrorist and wrongdoer. As it does the role of seculars who expressed their outrage at his victimisation because of his religion. Khan himself maintains that he would have been treated in the same way, no matter what his surname.

“I would have incurred the wrath of the authorities for actions which were thought to draw too much attention to the tragic events at the BRD Medical College…The outrage over my religion being the reason for my persecution managed to distract from the negligence and the corruption that were coming to light”, he writes.

That those lines could have been written for any medical tragedy anywhere in the country, is as distressing as it is illuminating.

Book: The Gorakhpur Hospital Tragedy: A Doctor's Memoir of a Deadly Medical Crisis