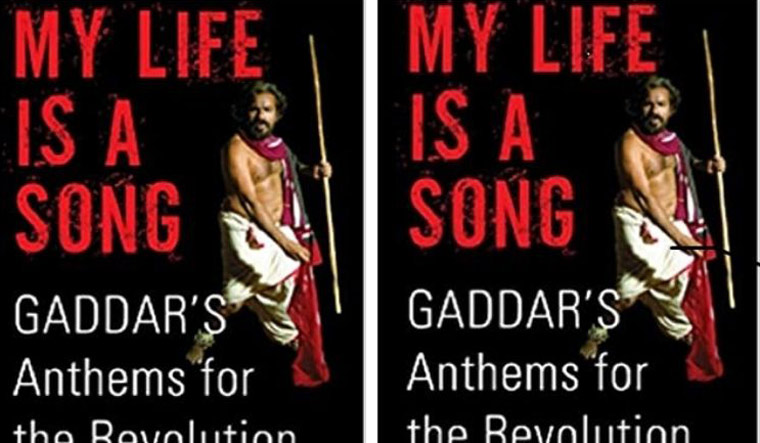 Gudumba in Telugu means illicit liquor. When Gaddar—poet, singer and revolutionary—notices how the ordinary folk enjoy their "gud", he refuses to castigate the drink as something morally reprehensible. And so, part of his song on Gudumba goes thus:

Only yesterday you met my people.

You got to know

all the secrets of the people

No I don't want you, girl

Little mother I don't want you

I don't want you, Gudumba girl.

I will drink the blood

of those who drink my blood.

Similarly once on his way to a performance, when the Telugu balladeer, considered one of the most prominent faces of grassroot struggles in India, saw some cowherds sitting and singing about toddy, he replaced some vulgar connotations in their song and it transformed into a kinship with "Jeethagadu" or bonded labourer.

When chants of 'Salaamun Halai' wafted out of a dargah, Gaddar learnt it meant 'salute to the dead' and a song was born:

This is how Gummadi Vittal Rao—popularly known as Gaddar, his non de guerre—paid homage to the common people who inspired his firebrand poetry. He took their songs, worked on them and then took it back to them, so they could change their lives. "The people are great poets. They are great artists. There is great poetry in their songs. There is life in their dialect," he writes in an essay in 'My Life is a Song: Gaddar’s Anthem for a Revolution' which brings to life, for the first time for English language readers, the beloved songs of one of India's greatest people poets. He is a cultural icon and a household name in Telugu society.

Gaddar is among the most well-known of the figures associated with people’s resistance movements in India. Born Gummadi Vittal Rao in 1947, in Tupran village of Medak district in what is now Telangana, he became an activist in his youth after dropping out of engineering college due to poverty. With a gift for singing and song writing, he travelled the road—for some time underground—reaching lakhs of people with his music, and became the cultural face of ‘rebellion’, the literal meaning of his nom de guerre.

With his inborn ability to sing, dance and write verses on the sorrows of the nameless and the faceless, he became the cultural face of the People's War Group, one of India's oldest militant revolutionary parties. He understood that the marginalised expressed their fears and anxieties in oral traditions of songs and folk dance.

Of the thousands of songs Gaddar performed, only a few were ever recorded in print. 'My Life Is a Song' brings together, for the first time in English translation, twenty-three representative songs, selected by his friend and fellow traveller, Vasanth Kannabiran.

Translated from the original Telugu with a keen eye for Gaddar’s unique style and delivery, this selection takes the extraordinary ‘anthems’ of a living legend of revolutionary thought to a wider audience.

In a powerful introductory essay, 'The Bard of The Revolution,' the translator distills the life and legacy of the poet in one pithy sentence: "The noted intellectual Kancha Ilaiah Shepherd says that if Russia produced a Gorky, China a Lu Xun, India has produced a Gaddar."

With his ability to captivate crowds and move them to action, Gaddar was unsurprisingly on the hit list of the cops. In 1997, he was shot at point-blank range in his own house. Although he survived the attack, a bullet continues to reside close to his spine. The translator does not miss the irony when she notes how the state provided him security back-up after this incident. "Twenty years later he still moves around with a security guard and a bullet safely lodged in his back," writes Kannabiran who is a poet, writer and campaigner for women’s rights.

Book: My Life is a Song: Gaddar's Anthems for the Revolution