In the 2000s, it was not uncommon to find a female Star TV executive primping at a beauty salon during duty hours. And on company tab. For head honcho Peter Mukerjea, workplace atmosphere and ethos were significant parameters, and he spared no expense. “Quite often I compensated people more than what they expected because only then could you get them to constantly deliver great results,” Mukerjea told THE WEEK.

This anecdotal reveal, and many other insights that pepper Mukerjea’s just-released memoir Star Struck, help shed light on his rather legendary run in India’s corporate echelons. Helming Star India from 1997 to 2007, Mukerjea transformed the then also-ran TV network, and its flagship Hindi entertainment channel Star Plus in particular, into an industry leader.

Of course, mum’s the word when it comes to those problematic travails in his later life—like being implicated in the Sheena Bora case. There is not even a whiff of a mention of the ‘mum’ in question. Instead, Mukerjea’s book focuses, very much in a horse-with-blinders-on mode, on his days at Star TV.

“It would not be an honest response if I said this was not intentional,” he admits, adding, “I was very clear in my mind that this was about my professional life and nothing else.”

Not that it is such a bad thing. Mukerjea’s nearly decade-long stint heading Star India was not just a corporate success story; it literally transformed India’s television industry, and in the process, India itself.

In Star Struck, Mukerjea takes readers on a fly-on-the-wall trip through this momentous evolution. From the moment he realises he is up for the plum post while in a taxi in Hong Kong to flying into Mumbai, the umpteen meetings, recruitments and strategising—all goes into an amorphous whole as he works on reinventing the Star juggernaut in India. The brief from global media mogul (and boss) Rupert Murdoch is succinct—break into the top slot, and make a tidy profit while at it.

It was not going to be easy. When he took over, Zee TV ruled the roost in the Indian television firmament and the Star network, despite its early-mover advantage, huge coffers and brand equity, remained a distant third in the lucrative Hindi language category, with Sony coming second. While he dwells a little on the other channels under his brief, the ‘main course’ in this book is very much Star Plus. Or rather, how he helmed its transformation from an urban channel beaming international soaps like The Bold and the Beautiful to sindoor-and-sari sagas like Kyunki Saas Bhi Kabhi Bahu Thi.

Not to forget the crore craze he let loose. Mukerjea takes the reader behind the scenes to the board meeting where Rupert Murdoch upends his plans for Kaun Banega Lakhpati by raising the prize money a hundred-fold.

Mukerjea’s very Brit subtlety, fortified with an intellectual sharpness, comes through in the way he narrates the many crises which peppered his stint at Star. The incidents are detailed and crisp, the recounting in reported speech leaving no doubt as to it being his version of events. In trying to downplay the momentous issues he faced—right from getting government permissions, dealing with the cable and distribution lobby and, most vexing for him perhaps, getting the overlords at the Star headquarters in Hong Kong on board his many plans—Mukerjea’s apparent aversion to dramatising the events is amply evident.

Now that his professional life story is done and dusted, will he get around to writing about the truth behind the infamous murder? “Personal elements of my life, I believe, should be privately held anyhow,” he suggests. “There are a couple of thoughts in my mind which I have yet to crystallise completely and to see how they evolve.” Then he says tantalisingly, “You never know, it may be sooner than one imagines.” 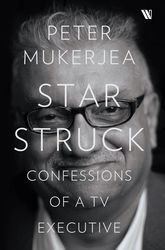