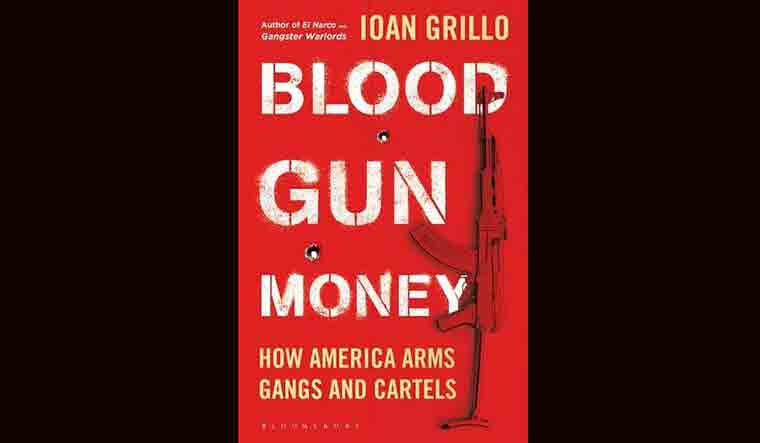 Ioan Grillo’s book is about the trafficking of illegal US guns which wreak havoc in Latin America killing innocent people and making monsters out of teenage kids. Grillo maps the flow of the “iron river” of illegal guns from the US to cartels in Mexico, Central and South America. It is estimated that more than 200,000 guns are trafficked over the US-Mexico border every year. According to the Mexican law enforcement agencies, about 2.5 million guns had been smuggled into Mexico from US in the first decade. The illegal US guns are the main factor in the gruesome violence in the "Northern Triangle of Violence" in Guatemala, El Salvador and Honduras.

Grillo has brought out the symbiotic relationship between guns and drugs. The two fit together like a lock and key. ﻿The gun black market is thriving and working in tandem with drug trafficking. Illegal flights which take drugs to US return with guns to Mexico. ﻿The business is highly profitable, thanks to the elastic prices of both products on the black market. One could exchange a few wraps of heroin with a junkie in Maine for a $500 handgun which could be sold to a Mexican for 2500 dollars. The gun black market provides a tool that allows gangsters to control those drug profits. The two products are often bartered. ﻿

United States has an estimated 393 million guns in civilian hands. The gun industry adds at least a million more every year with production and imports. The ﻿American gun companies profit from the black market in guns. ﻿The gun lobby has fought the policing of the gun black market, defending the loopholes and achieving limits on law enforcement of firearms. The result is that it effectively defends the criminal market in guns which are illegally supplied to Latin American cartels

Mexico has only one gun shop for the entire country of over one hundred million population. It ﻿is run by the Mexican army and is located in a defense department building in Mexico City. There is rigorous background check of the applicants for guns.  ﻿The shop sells about nine thousand guns a year to the public. Of course, a few more thousand (both from their stocks as well as those seized in raids) are sold illegally by the army and police officers. But this is very small compared to the 200,000 arms which come into Mexico illegally from US.

Across Mexico’s border, there are about 23,000 gun shops in the four states of US. The state of Texas alone has 10,810, the highest in US.  California has 7,530 shops and Florida 7,201. These are the main sources of illegal supply to Mexico and Latin America. The total number of Federal Firearms Licensees across the nation is about 135,000. To put this in perspective, the US has 10 gun shops to every Macdonald.

There is hardly any restriction on arms purchases in US. There is no legal limit on the number of firearms one can own. A buyer named Uriel Patino had purchased 723 guns for a total of $575,000, according to a document of the Department of Justice. In 2000, a firearms dealer in Ohio sold 182 guns to a man, including 85 in a single purchase. These straw purchasers ( buyers on behalf of others) get paid $70 per pistol, $100 per rifle, and $500 for each .50 caliber. It is estimated that the sales to Mexican gangsters made $127 million a year for the U.S. firearms industry. So, the last two decades of Mexico’s drug war could have meant well over a billion dollars in revenue.

The gun control laws do not apply to private sales.  No paperwork or background check necessary. According to an estimate, over 20 per cent of gun sales are through such private transactions. One can walk into the gun shows held every week in the border states and buy an AR-15 with no paperwork.

The US has strict laws against drug trafficking and routinely arrests and puts in jail hundreds of thousands of small-time vendors. But it does not have specific law against gunrunning. There are gaping loopholes and bizarre restrictions on policing arms, making important parts of gun law unenforceable. This is exploited by the black market to maximum effect. The ﻿Department of Justice states, “There is no federal statute specifically prohibiting firearms trafficking or straw purchasing.” Instead, the law has dozens of smaller firearms offenses, such as “engagement in firearms business without a license,” “knowing sale to prohibited person,” and “knowing shipment or transport of a stolen firearm.” ﻿American gun culture has helped forge a bizarre labyrinth of gun laws in which the black market thrives.

There is no searchable database for guns in the United States because the law won’t allow it. If a car is in a hit and run, a police officer can type the license plate into a computer and get the name of the owner. ﻿But the gun code prohibits “any system of registration of firearms, firearms owners, or firearms transactions or dispositions be established.” So, they can’t put those records into a database. The gun lobby has been working relentlessly against proposals for databases.

The US government and the public wake up on the gun issue only whenever there are mass shootings in schools and malls. There is some noise and calls for gun control. But soon the issue is forgotten and the guns continue to flood the market. There does not seem to be hope for any effective controls for gun trafficking, given the power of the gun lobby and the entrenched gun culture.  This means the continuation of trafficking of US guns which will keep killing of thousands of Latin Americans. Unfortunately, the Latin Americans do not take up the issue with US publicly and forcefully.

There is a Latin American conspiracy theory which holds that the US is deliberately allowing gun trafficking to cartels to make Mexico weak ﻿and unstable, and so easier to control. The theory was articulated in a Mexican newspaper editorial headlined “Guns to Destabilize Mexico.”

The US War on Drugs is a failure and it has become more as a game of deception. It has failed to reduce the American consumption of drugs. The only gain for US is that it has managed to stigmatise Latin America and destabilise the region. The US government, Hollywood and media have misleadingly portrayed Latin America as the cause of the drug problem by focusing exclusively on the supply side.  They blame Pablo Escobar and El Chapo as the villains for production and trafficking of drugs into US. But the truth is that drug is basically a consumer driven business amounting to an estimated 150 billion dollars a year. It is the continuing American consumption which drives the drug trafficking.

What the US does not talk about is the trafficking of illegal guns from US which kill more Latin Americans than the number of Americans killed by drugs. These illegal American guns have made the Mexican and other cartels in Latin America as deadly forces traumatising the societies in the region. The US does nothing to stop this arms trafficking.

Ioan Grillo’s book reveals to the readers the ugly truths covered up by the US government and the dangers posed by the gun lobby beyond the American border. Bolsonaro and his sons, who are admirers of NRA, are said to be taking the advice of NRA to lose gun control in Brazil. Grillo, who is a British journalist, has given an authentic and unbiased account of the gun trafficking, based on his coverage of Mexico in the last two decades. He has witnessed first-hand police and military operations, cartel killings, severed heads and bodies and mass graves. He has interviewed cartel assassins, drug and gun traffickers, gun manufacturers, security officials and political leaders. He has written two more books: El Narco: The bloody rise of Mexican drug cartels; and Gangster warlords: Drug dollars, killing fields and the new politics of Latin America.

One cannot but agree with Grillo’s comment “Drugs are consumable—they go away. Guns don’t go away.”