According to legendary filmmaker Mike Nichols, he was born at the age of seven, on a six-day boat ride from Germany to America in 1939. He did not even own his name—which was Michael Igor Peschkowsky. Years later, when his brother found this out from the ship’s records, Nichols looked at him and said: “Maybe. Maybe it was.” As Mark Harris writes in a new book, “It did not matter. Whatever his name [was] when he boarded the ship, it was gone by the time he got to New York.”

He shed Igor—"a horror movie name”—and assumed Nichols, an all-American one. But it was not easy for him to grow into his name. A whooping cough vaccine he received at the age of four had left him permanently bald, which led to unending bullying in school. In a constant endeavour to overcome the discomfort of being himself, he sought refuge in the comforts of the world. At the age of 35, after a string of successes like The Graduate (which won him an Oscar) and Who’s Afraid of Virginia Woolf?, he lived in a three-story Central Park West penthouse, drove a Rolls-Royce and collected Arabian horses.

In Nichols, Harris has found the perfect muse—a high-strung narcissist whose life was as rollicking as his movies. He might not have made it to the canon of legends like Martin Scorsese and Francis Ford Coppola, but only because he did not have a signature style or repetitive motifs. You could not identify him with his work, and that might be indicative of a greater genius. 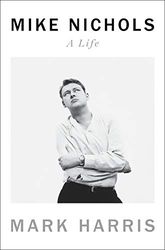