Lockdown reading: ‘The Toss of a Lemon’ 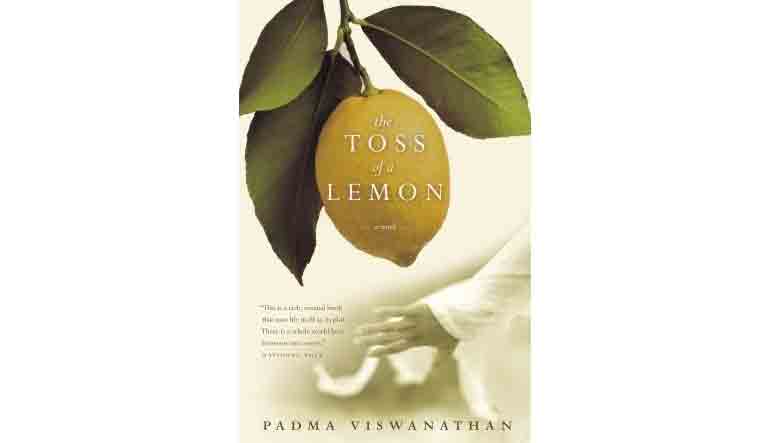 Padma Viswanathan’s The Toss of a Lemon is the story of Sivakami, a rural and traditional Tamil Brahmin and her extended family through several generations in the nineteenth and twentieth centuries.  She gets married at the age of 10 and gives birth to a son Vairam and daughter Thangam. At the time of her delivery, the midwife tosses a lemon, a practice done to announce the birth of child to the husband and other males waiting outside the room. The men note the exact timing of toss of the lemon and give it to the astrologer for writing the horoscope of the child.

Sivakami starts her life in Samanthibakkam village where she is born and spends the rest of her life after marriage in Cholapatti, the village of her husband. Cholapatti is 20 minutes by bullock cart from Kulithalai, the nearest town from which one can take the train to Trichy, the district headquarters.

Sivakami becomes a widow at eighteen with two kids when her astrologer-husband dies as predicted in the horoscope. She brings up the children and manages the agricultural lands of her husband with the help of a lower caste supervisor Muchami. She marries off her daughter Thangam, also at an early age, to an adventurous boy Goli who becomes a Revenue Inspector and does some business ventures on the side. Her son Vairam gets college education in St Joseph College, Trichy and eventually settles down in Chennai. Goli has an affair with a devdasi whose daughter becomes a film actress at the end.

Sivakami lives the austere life of a widow wearing a white saree without blouse, as prescribed by the tradition. She eats food prepared only by herself. She keeps herself generally invisible and untouchable. She is not allowed to wear silk sarees and jewellery. She is prohibited to put vermillion dot on the forehead or to have flowers on the hair. She gets her head shaven periodically by a low cast barber before day light. She takes bath in the river in pre-dawn darkness and returns before light so as to spare her neighbours the sight of a widow, a sign of bad omen. She is not allowed to be present in auspicious ceremonies.

The author brings out the orthodox Tamil Brahmin rituals and rural scenes vividly. There are pallanguzhi games, four course meals on banana leaf, bullock cart journeys, bathing in Kaveri river, acute but unspoken tensions and politics within joint families, servants for domestic help and for farm work, ‘poonul’ ceremonies, Golu (exihibtion of dolls) during Navaratri festival, cotton dhotis for men, silk sarees for women, silk paavaadais for girls and kudumis (tufts) for boys. There are strict practices of purification through bathing and other rituals after contacts with lower castes. There are the typical TamBrahm expressions in Sanskritised Tamil. Some young Brahmins including Vairam rebel against Brahminical exclusiveness and start mixing with non-Brahmins.

While the story is mostly about the life and struggles of Brahmins, the author gives slight touches of the external world. She gives glimpses of Dravidian movement against Brahmin domination and the national Independence movement for freedom from the British rule. There are debates about the larger social issues of superstitions, prejudice and blind adherence to unjust and irrational traditions. The non-Brahmins celebrate Ravana as the hero to spite and ridicule Rama worshipped by Brahmins.

Brahmins from the village migrate to the cities and to the west, leaving village agraharams (Brahmin neighbourhood) empty and deserted. There are several such ghost village Agraharams around my own village Alangudi Mahajanam, which is 60km from Kulithalai town, going along the route of Kaveri river. A few old Brahmins still move around like ghosts in desolate streets with haunted houses.

The only problem with the novel is that it is too long, running into more than 600 pages. In the first 200 pages, Padma builds the story and raises the expectations of the readers. But thereafter she keeps repeating details of marriages, pregnancies, births, deaths and ceremonies one after another without any exciting action, suspense or drama. One gets lost in so many names and details of their routine activities. The story flows placidly and monotonously like the Kaveri river in Trichy area. It looks like the way in which old grandmothers weave and repeat stories putting their grandchildren to sleep.

The long story of Sivakami reminds me of ‘Sivakamiyin Sabatham’, the famous epic novel of Kalki which is longer. But Kalki keeps the readers anticipating with excitement before each chapter till the end. But one should give allowance to the fact that this is the first novel of Padma. Her second novel “The ever after of Ashwin Rao” is shorter and more gripping till the end. She takes control of the story herself with her own experience, creativity and imagination.

With this novel, Padma has followed admirably in the footsteps of R.K. Narayan in opening up south Indian society to the international readers in the English language. Narayan did it during the colonial times with the help of his literary contacts such as Graham Green who introduced him to publishers in London. But Padma has struck it competitively on her own in US as any other American writer. It is admirable that Padma's novel has got positive critical reviews from mainstream American media and literary circles.

The Americans and westerners are struck by the success stories of south Indians such as Sunder Pichai and Satya Nadella in Silicon Valley. The nomination of Kamala Harris, born to a Tamil Brahmin mother (Shyamala Gopalan), as a Vice Presidential candidate in this year's election will add to the interest in south Indian culture. She said, "My mother instilled in my sister, Maya, and me the values that would chart the course of our lives. She taught me that service to others gives life purpose and meaning". This is the philosophy of Sivakami, the main character in the novel.

Padma has used the same simple and direct story telling method of Narayan. There are no complicated expressions, mysterious meanderings or Freudian analysis. The story moves directly and chronologically with clear descriptions of characters, places and events. The stories of both Padma and Narayan are authentic portrayals of the traditional south Indian society. Both have succeeded in making effective use of the English language to bring the culture and people alive and natural.

The only difference is that Narayan had lived all his life among his Malgudian characters, while Padma’s experience is second-hand. She was born and brought up in Canada. So, she has no direct personal experience of what happens in the story. Her Tamil parents had emigrated to Canada from Trichy. She now lives in Arkansas working as a professor of literature and creative writing. Padma says that the novel is based on the stories she had heard from her own grandmother as well as from her relatives.

Padma has gone beyond the Tamil and English speaking worlds. She has translated a Brazilian novel Sao Bernardo into English. The Portuguese used in Sao Bernardo is provincial from the rural northern interior part of Brazil and spoken hundred years back. Padma has done a remarkable job of bringing the Brazilian characters alive with her expert translation skills.

In this novel Toss of a Lemon, Padma has sprinkled a lot of typical Tamil expressions and words such as kanna (darling for boy), puja (worship ceremony), jimikki (earrings), kolam (design of connecting dots through lines with rice flour in the front of the house), pazhaya sadam (rice fermented with water overnight), siddhas ( itinerant ascetics), tiffin, iddli and dosa, sambar and rasam , pacchadi (yogurt and cucumber), veeboothi (sacred white ash applied in forehead), chithi (aunt) and Aiyo (expression of shock, surprise or pity).

Kamala Harris used the Tamil word ‘Chithi’ (aunt) in her address while accepting the nomination as Vice Presidential candidate. The words ‘Aiyo’ and ‘Aiaiyo’ have recently got included in the Oxford Dictionary. My golf buddies in Delhi shout ‘Aiyo’ when I miss long putts and scream ‘Aiaiyo’ when I mess up short ones.

The Great Tamil poet Bharathiar, who wrote: ‘The sweet melody of Tamil should be spread around the world’, should be smiling from the heaven and cheering for Kamala and Padma.