'The Legend of Himal and Nagrai': Reviving Kashmir's folklore 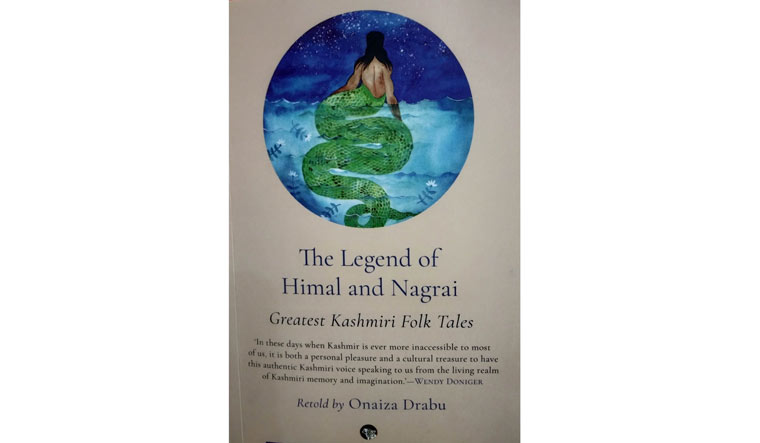 Traav kuntrehan seeth. Or "leave it at the 29th" is a Kashmiri idiom for something that is no longer relevant. Or something that has become peripheral or unimportant. It is usually reserved for someone who is fussy and is best left alone. The piquant expression might have tiptoed into Kashmiri language since the days when one was not sure if a month in the lunar calendar had 29 days or 30.

For Onaiza Drabu—Kashmiri anthropologist, author and co-curator of the popular newsletter Daak—kuntrehan or "29" is also the number of stories collected in her book on Kashmiri folk tales, The Legend of Himal and Nagrai (Speaking Tiger, Rs 250, 222 pages). In fact, the 29th story in the book—'Soda Byor, Boda Byor'—is her own creation unlike the previous 28 which are translations from oral narratives passed down through generations. "The number of stories in the book is a metaphoric play on the idiom. As a way of saying how most people just do not think folklore is relevant anymore. So yes, you leave it at the 29th," says Drabu whose last primer on Kashmiri culture came as a Children's book in July, Okus Bokus: A-Z for Kashmiri Children.

Assembled from the annals of childhood memories, re-tellings by family elders and housekeepers (kakas), references by academics and folklorists, the idea for the book was birthed in 2014 when Drabu was collecting Kashmiri folklore and proverbs and was mostly complete as an edited manuscript in October 2018. That the book released last month at a very crucial juncture in Kashmir's political history, Drabu says, is "purely coincidental". The Legend of Himal and Nagrai is meant to evoke the illustrious tradition of fables and bedtime stories one grows up listening; to emphasise the art of personal storytelling, where the voice carrying the tale always adds extra elements, making folktales a living, breathing entity; and the syncretic world of Kashmiri storytellers in whose imagination the peris of Persian folklore, the nagas of Sanskrit stories, recounting of Persian dastaans and Sanskritic Panchtantras coexist in harmony.

Most of the stories translated in this collection are narratives which are heard and told to—the ones which Drabu or her parents grew up hearing, fables which have not been translated in English. This is what distinguishes Drabu's book from the already existing collections of Kashmiri folktales by the likes of Sir Aurel Stein, J.H. Knowles, Somnath Dhar or Bani Roy Choudhury. The really famous folktales—like the macabre daastaan of Akanandun where a mother is forced to cook a meal with the flesh of her son—is given little importance, restricted to less than four pages. But more interestingly, Drabu has attempted to capture the voice of the teller in each story by weaving in elements of folk belief, specific typologies, figures of speech, superstitions which are very palpable and alive in everyday Kashmir. She is literally telling the stories in her own voice rather than translating it.

There is a delectable dictionary at the end of the book. And every story trains the reader to enter and feel the magical, mystical world by first going through a list of untranslatable Kashmiri words. So "Ama" is an interjection as in 'I wonder' and 'Is that so', dapaan for 'it is said' and 'Kaminis zuh' is a place of trials and tribulations.

Perhaps the most relevant story which you literally hear while reading is Drabu's own 'Soda Byor, Boda Byor'. It should have been placed right in the beginning. It follows the device of a tooti-lambukh—tales within tales and uses the trope of two guides, Soda Byor and Boda Byor, who are familiar characters from other stories. The two mischievous guides perched on a tree-top in a dense forest chance upon a child and his housekeeper who are lost in the woods. The guides know the stragglers had gone to the grocer's but arrived at the baker's, to use another popular Kashmiri idiom. Telling stories is the only way out of the forest. "Stories, after all, show the way, don't they? It is said: a tale lives on only if it is retold," reads a line. It is perhaps the most poignant line which resonates beyond the book as Kashmir continues to reel under an internet shutdown in most parts of the valley.