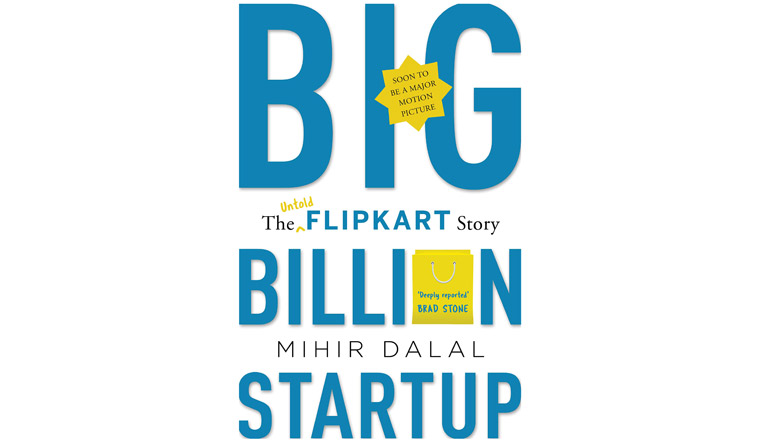 For a regular Indian cybersurfing at home or on their mobile phones while commuting, the word ‘Flipkart’ lights up their brain with visions of shop-till-you-drop, fuelled by ‘deep’ discounts and a range of options on almost everything under the sun that runs into crores. Of course, the Flipkart story is much more than a business success story. It is the journey of ‘India’s biggest internet startup’, as its publishers put it.

All journeys start with a small, single step, and it is to writer Mihir Dalal’s credit that he has dug extensively into the background to get to the origins of the Bansals, Sachin and Binny (no relation to each other) in the new book Big Billion Startup: The Untold Flipkart Story. Then he straps in, taking the reader along as the Bansals take their small Bengaluru online book-seller to the top of the heap as India’s biggest e-commerce success story. And in the process, redefined India’s (and the world’s) start-up touchstone, kicking into high gear an era where terms like unicorns, billion dollar valuations and angel investors became common lingo, including the term ‘Flipkart’ (the Bansals wanted an inexpensive domain name, and hoped that the term ‘kart’ would register the idea of shopping and shopping cart with customers).

Just like any story of ambition, big money, power and hubris, this tale is red-hot material. But this masala plot does not have a Bollywood ending, rooted as it is in the harsh reality of life and business―even though it craves for one at many points as the story graph progresses. From the Bansals' IIT days to when they launched the site from a Koramangala apartment, Dalal tries his best to maintain his objectivity, to separate the wheat from the PR-chaff.

For an eager-beaver business historian (if that’s a thing), this is golden material to possess a deeper understanding of how things transpired as the Bansals aimed for the sun. As a read, it is interesting enough, even if Dalal’s constant detour into irrelevant back stories and half-baked attempts at peppering the book with catchy anecdotes end up like Bengaluru traffic and its endless one-way detours. For example, the starts with an entire chapter detailing the origin of its rival Amazon in India. A mere reference to where Amazon’s office in Bengaluru is located is enough for him to promptly detour into a history lesson about the man the road is named after.

Those minor peeves aside, where this book scores is in giving the reader a racy ringside view of a corporate story that went beyond the wildest dreams of its founders―though naked unbridled ambition soon made it hurtle spectacularly out of control, prompting the entry of a whole set of global big guns that transformed it forever, an ironic testimony to its success. That’s the kind of comprehensiveness the pink papers often don’t do enough justice to. This book is no Steve Jobs-like idol worship. It is a story rooted in extensive research and objectivity. It’s not just a ‘dream-come-true’, but also an elegy to what could happen when your dreams comes true.

The book will be available from Sunday, October 6.