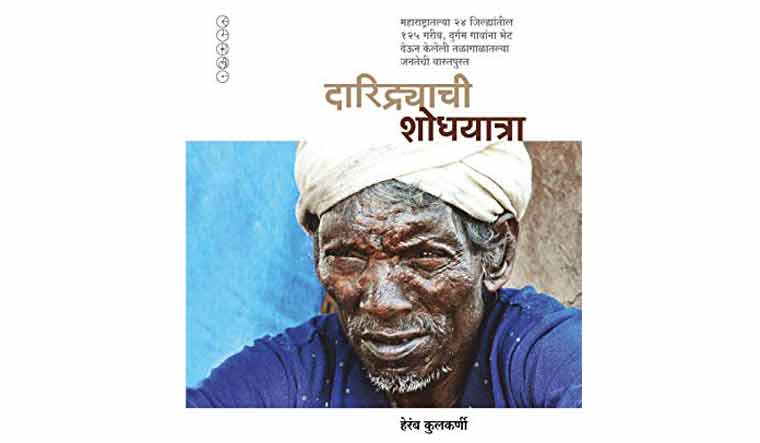 In a country where according to official figures, more than 36 crore Indians still cannot afford three square meals a day, poverty is a contested subject of discussion both, in the government's corridors and in its policies. Policies, including income transfers to the poor, framed inside closed doors in the highest echelons of the establishment, rarely reach the intended recipients on the ground who negotiate abject poverty and drudgery on a daily basis. In a country full of contrasts, what does it mean to be poor? How does one define poverty and where does one look to find it? These and more such questions are answered in Daridrayachi Shodhyatra, a book by educationist and Ahmednagar-based author Heramb Kulkarni, who visited 125 poorest villages across 24 districts in Maharashtra to see first-hand what destitution and impoverishment do to a community and its people.

Right at the start, the author cites social worker Ulka Mahajan's interpretation of poverty which has had a profound impact on his own understanding of the subject. 'Poverty is deprivation'—it is not just the lack of food and money, rather the lack of strength to stand up against injustice and to put up with exploitation, the absence of one's social status in a community, the lack of political participation.

For the author, who travelled at his own expense on rail and on foot between June 2017 and Feb 2018, this came as an inner calling—as a way to find out for himself, if at all after we cheered to 25 years of economic liberalisation, anything changed for the poor and the marginalised inside the remotest hamlets of the country's far off, often forgotten villages. The answer to a large extent remains a regrettable no.

Poverty is an entrapment, a scourge leading to never-ending debts. The author talks about Deepak Tale who owns 50 acres of land in the village of Sukli. "Months back, his entire farm was on fire, because of which the crops did not yield, leading to a loss of a whopping eight lakh rupees. This is in addition to the loss he had incurred once earlier too, due to crops failing as a result of a natural calamity. 'The losses keep adding up. With no reimbursements from the government and no recourse to relief, these farmers are pushed towards suicide. Despite owning a large piece of land Deepak did not even have the bare minimum needed to get the rusting tin roof above his head mended. Village after village, I met with people who had spent their entire lifespan trying to pay off loans and debts, until they were left with nothing else,” he writes.

The women try and invest whatever little they save in gold jewellery, with the intention that when the time comes, it'll salvage a sinking ship. "One of them took a loan of Rs 50,000 for a wedding on which she paid an interest of 20,000. In times of despair, 10 grams of gold fetches a loan of Rs 15000 at a monthly interest of 4 percent. If within one year, the family fails to claim it back, it is put up for auction. This is why the poor believe, that once the ornaments go out of the house, they never come back."

Taking inspiration from P. Sainath's Everybody Loves a Good Drought, Dr Kulkarni's book is far from being an essay, a research paper, a study or even a survey. It is more on the lines of a focused group discussion which the author has with the villagers by sitting down with them on the porch outside their mud homes, eating what they eat and regaling in their tales about life and living. 'What do the poor eat?,' 'their unending fear of the farm,' 'wedding expenses and deprivation,' 'excessive medical expenditure,' 'jobs under the employment guarantee scheme,' 'farmer suicides,' are a few of varied issues affecting the penurious, as discussed in the book by way of 21 chapters that give away the message through a crisp and gripping first person narrative.

The report, a collection of interviews and case studies, was published in January. Through his observations and interactions with the locals, the author has tried to give a voice to the voiceless. At the same time, he also makes the reader aware that migration has been taking place in villages like never before. As a reader, one gets a sense of how the deprived young, unlike their predecessors have the relentless urge to fight for their rights rather than giving in to their fate.