Surprise, Strategy and ‘Vijay’: Revisiting the 'josh' 20 years after Kargil

The book resonates the ethos of the Indian Army 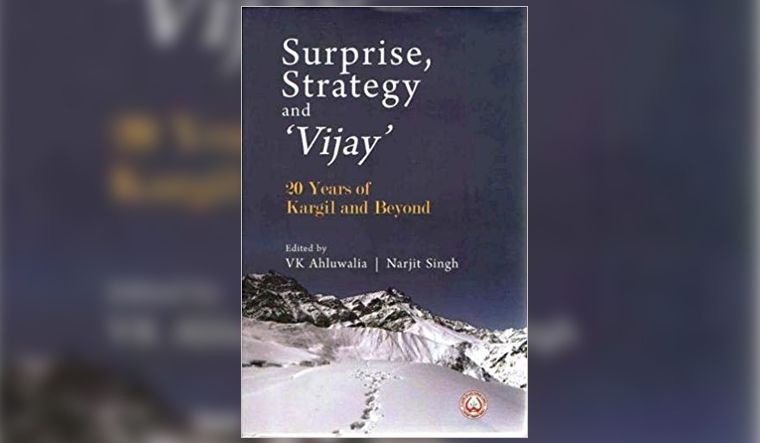 Commemorating 20 years of the Kargil conflict, New Delhi-based Centre for Land Warfare Studies (Army think tank) has released a book titled Surprise, Strategy and ‘Vijay’: 20 Years of Kargil and Beyond, co-edited by Lt General V.K. Ahluwalia and Colonel Narjit Singh. The book provides an account of what had happened, the role played by each regiment of the armed forces, experiences of army personnel involved in the conflict, heroic stories of martyrs, lessons learnt, emerging challenges and the way ahead to counter the changing geo-political and security matrix in the sub-continent in the coming years. It resonates the ethos of the Indian Army—the jazba, josh and junoon.

Kargil was one of its kind with respect to high altitude, sub-arctic temperature, rarefied atmosphere, rugged mountains and various other geographical challenges. Was the battle that was fought at Kargil a war or a conflict is a debatable issue. The book uses the words interchangeably. Surprise, Strategy and ‘Vijay’ is divided into five parts covering various aspects related to the conflict.

Part one—Blood, Guts and Glory—discusses the events and the valour shown by the army men defending various mountain points of the battlefields during Operation Vijay. The sub sectors of the battlefield included Dras, Mushkoh, Batalik, Kaksar and Turtuk. The difficult terrain and lack of snow equipment for the Indian army was an added challenge but the men in uniform countered and captured Tiger Hill, Tololing, Pimple 1 and 2, the ‘Batra top’ and Khalubar. These victories were the highlight of the conflict. The eye-catching part was the motto of the 8 Mountain Brigade—“Forever in Operations”—defining their vigilance and will to encounter any threat. The section also includes narratives of Operation Safed Sagar by the Indian Air Force and Operation Talwar by the Indian Navy. Even though the role of the air force and navy was limited, it is often observed that they play their parts supporting the army in most of the conflicts.

The following section—Synergy to Victory—discusses the role of the air force, navy and other regiments of the army including the synergy between the artillery and infantry. It also addresses the need for future synergy of tri-services and the role played by sappers and engineers. It further gives an account of perceptions and opinions by the army personnel who had been a part of the limited war including the former Chief of Army Staff General V.P. Malik who was the Chief of Army Staff during the conflict and Lt General Mohinder Puri who commanded the 8 Mountain Division during that time. The section also presents personal accounts of the commanding officers, signallers and paratroopers.

The heroics and the valour displayed by young army officers who fought until their last breath against the intruders is what defines the timeless ethos of Naam, Namak and Nishaan. The brave stories of Captain Vikram Batra aka Sher Shah, Lt Manoj Pandey and Captain Anuj Nayyar are the epitome of motivation for future generations and indeed a must read for the younger generation.

The last section discusses the emerging challenges and how we should apprehend the future. It further suggests on jointness among armed forces and giving emphasis on technological advancements and innovations leading to indigenisation of production. The relevance of strategic cooperation and partnerships is also assessed where India should be more pragmatic.

The book is out at a time when India is impeded with hindrances from its western and northern adversaries. The emerging world order and changing character of conflicts driven by hi-tech innovation in defence equipment pushes the armed forces to keep the pace globally. Surprise, Strategy and ‘Vijay’ has exquisitely brought out the fact that “Till the time we do not understand the variance between tactics and strategy, we as nation would keep celebrating our victories in battles but we may not win a war”.

The book’s relative brevity and accessibility will not only make this material available to mainstream scholars and strategists, but would also help increase interest in military history and perspectives related to the events.

Book: Surprise, Strategy and ‘Vijay’: 20 Years of Kargil and Beyond