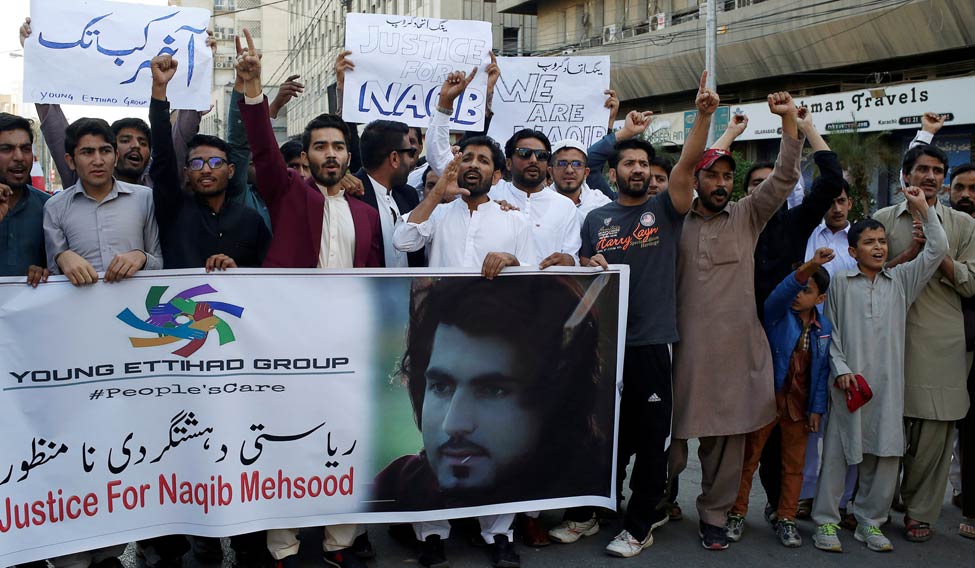 Rao Anwar Ahmed Khan's police force in Karachi shot dead a 27-year old Mehsud Naseemullah (aka Naqeebullah), originally from South Waziristan, during an encounter. Rao Anwar had organised similar encounters in the past and in the last seven years there had been 200 clashes in the Malir District of Karachi in which 450 people had been killed.

Details of these killings are scanty or simply do not exist except that a large number of the dead were Pashtun. For Rao Anwar, the killing of Mehsud along with three others in Shah Latif Town was a routine affair where the dead would be shown as terrorists enabling to drill additional notches on the butt of his gun. These killings were presumably trophies ensuring further rewards.

As it turned out, Mehsud was no TTP or any other terrorist. Although he had come from the lawless borderlands of FATA, he had left home with his family during the Pakistan military operation in Waziristan and made their way to Karachi, a city which has the largest number of Pashtun living outside their province.

The family did not settle in Tank or Dera Ismail Khan as many others had done.

He was active on the social media and wanted to be in the world of fashion. But he was kidnapped on January 3, killed in an 'encounter' on January 12 and his family was informed on January 16. The Pashtuns' of Sohrab Goth and other parts were infuriated with the news and his friends were out on the streets protesting. The protesters marched from the Sohrab Goth graveyard to Peshawar.

Several people from Dera Ismail Khan, Multan, Tank and even Waziristan joined them. Eventually, Pashtuns in thousands held for sit-in demonstrations in Islamabad.

Addressing the large gathering of protestors outside the Islamabad Press Club was Hamid Mir, one of Pakistan's foremost TV journalists.

Mir has had several brush-in with the Rawalpindi crowd in the past but this did not prevent him from delivering a fiery speech, describing the demonstrations as a fight against the violators of the Constitution and the law of the land. He also added that unless these demands were met, demonstrations would spread to other parts of the country, beginning with the demand for seeking justice in the clearly dubious killing of Mehsud, the demands have now grown to include other grievances of the Pashtun.

The crowd also sought punishment for Anwar Ahmed and demanded that extra-judicial killings be stopped, that land mines planted in FATA which resulted in innumerable civilian casualties, including women and children, be removed, end enforced disappearances all over Pakistan, especially in Balochistan, Sindh and Pakhtunkhwa and innocent Pashtun be freed.

They have also objected to racial profiling of Pashtun, asserting that they have been victims of inhuman torture and that all this amounted to genocide.

Despite the venue of the protests, media coverage in Pakistan has been scanty unlike the coverage of the Tehreek-e- Labbaik Ya Rasool Allah sit-in last November where the government seemed to have given in to the demands and the media had covered the events extensively, presumably under instructions.

So far, the Pashtun Long March and protest, for which thousands of people of all ages had participated, is the first of its kind, has been orderly and peaceful. Many of the marchers have stepped out of their regions in FATA for the first time and have come to tell their story.

Their story is that of deprivation for decades living in squalid camps and then returning home where they faced land mines and IEDs.

With endless conflict in Afghanistan since the 1980's, generations of Afghans have died away from home fighting a war that was thrust upon them. In the early days of the Afghan jihad, it was a justified war against the Soviet invasion but their departure did not bring peace to Afghanistan.

The US military involvement in Afghanistan since October 2001, without controlling Pakistan's behaviour has been a horrible, expensive and an unsuccessful adventure. In the process, Afghanistan has suffered, and so have the Pashtun, on both sides of the Durand Line.

For decades now, they have faced violence and loss at the hands of the Taliban, the Pakistan Army and the US military drones.

It is true that the Taliban was essentially a Pashtun force but not all Pashtun were members of the Taliban or sympathised with them. Pakistan hoped that a religious force would submerge ethnic aspirations on both sides of the Durand Line.

With time, the Pakistani ploy of making use of a religious identity of the Taliban and their extremist ideology to keep control over Afghanistan has backfired.

Your form could not be submitted.
This browser settings will not support to add bookmarks programmatically. Please press Ctrl+D or change settings to bookmark this page.
Topics : #Pakistan | #Afghanistan