German police detain Greta Thunberg amid protests against coal mine 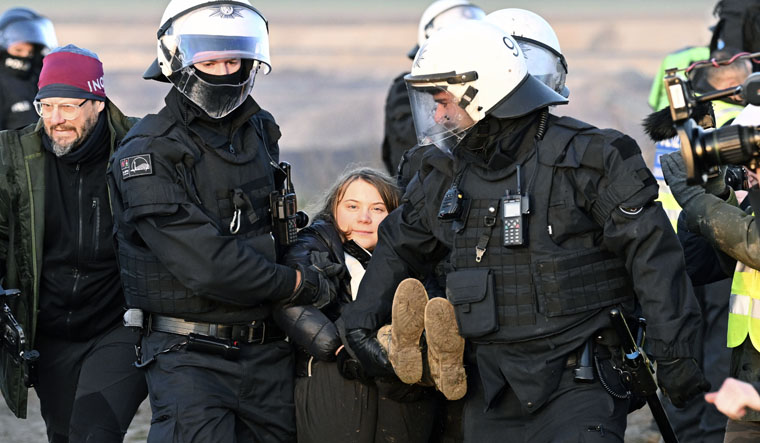 Police officers carry Swedish climate activist Greta Thunberg away from the edge of the Garzweiler II opencast lignite mine during a protest action by climate activists after the clearance of Luetzerath, Germany | AP

German police detained climate activist Greta Thunberg during protests against a coal mine expansion in Luetzerath on Tuesday. A few other climate activists were also detained.

Thunberg was detained while protesting at the opencast coal mine of Garzweiler 2, some 9 kilometres (5.6 miles) from Luetzerath, Reuters reported. Thunberg joined the protesters on Friday and she was seen sitting alone in a large police bus after having been detained, the publication reported.

Activists also occupied a giant digger at another coal mine in the west of the country as part of Tuesday's demonstrations and joined a protest march near Luetzerath. Police and energy company RWE started evicting protesters from Luetzerath on January 11, removing roadblocks, chopping down treehouses and bulldozing buildings.

Activists have cited the symbolic importance of Luetzerath for years, and thousands of people demonstrated Saturday against the razing of the village by RWE for the expansion of the Garzweiler coal mine.

Several activists who took part in the demonstration ran over to the Garzweiler open pit mine, according to dpa. They stood at the brink of the open pit, which has a sharp break-off edge. Police said it is dangerous and forbidden to stay there.

One protester was able to enter the mine, RWE said, calling the move very reckless, dpa reported.

Other protesters clashed with police near the mine, and officers used batons and pepper spray, police confirmed to dpa.