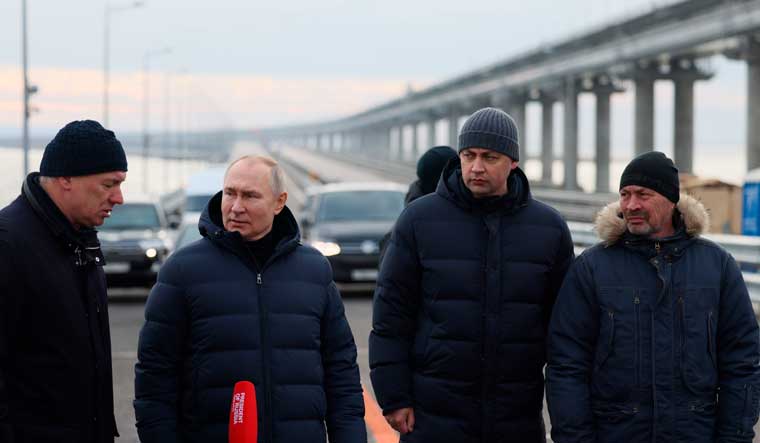 Two months after an explosion rocked the Kerch Bridge, the key link between Crimea and Russia, Russian President Vladimir Putin was seen visiting the bridge, a move seen as a morale boost to the Russians.

Interestingly, the video released by the Russian state media shows Putin behind the wheels of a German-made Mercedes and not his official presidential limousine Aurus Senat. The President's choice of the vehicle soon became a talking point, with some alleging that Putin was "making a point" by driving the Mercedes instead of a Russian-made car.

However, Kremlin spokesman Dmitry Peskov was quick to dismiss any speculation regarding Putin's choice. On why the President chose a Mercedes and not his Aurus, Peskov, the Press Secretary for the President of the Russian Federation, said "that kind of car was just available on the spot."

"He drove it in order not to use extra cars," Peskov was quoted by the Russian website TASS.

Putin is often seen riding his Aurus Senat himself, breaking protocols. Though Russia has never publicised its specifications, the vehicle is said to be as good as the US Presidential limousine. The Aurus can reportedly protect the Russian President even if it is submerged fully underwater.

The footage comes as Mercedes halted sales of vehicles to Russia and stopped production at its assembly plant near Moscow after the start of Russia's military operation in Ukraine.

Meanwhile, the video shows Putin riding along with Russian deputy prime minister Marat Khusnullin. Another shows him walking along a section of the bridge. Though it is unclear when the visit was made, Khusnullin is heard briefing Putin about the bridge, according to CNN.

"Metal was available for bridge parts, so the metal was brought over to build these structures, and within two weeks all the 1,214 tons were assembled and brought here," Khusnullin added, referencing the explosion that rocked the bridge in October.

The second video has Putin asking the deputy prime minister about the number of people who worked on the bridge repair. To this, Khunsnullin replies there were "500 people, three floating cranes, four barges and 31 pieces of equipment around the clock."

A worker is also heard telling Putin that while traffic had been scheduled to resume on December 20, "critical decisions which accelerated construction" allowed the section to be reopened on Monday.

The visit is considered significant as the 11-mile Kerch Bridge is a prestigious project in Russia. The bridge is the longest in Europe and carries both road and rail traffic.

The attack on the bridge in October had infuriated Putin so much that he ordered air strikes into Ukrainian infrastructure as revenge.  According to Putin, the blast on the bridge was an act of "sabotage" by Ukrainian security services.