The infection rate is still high in China with over 36,000 cases recorded this week 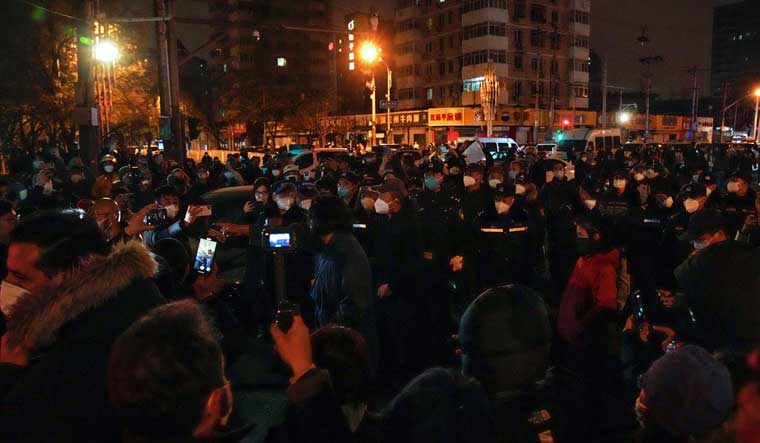 Days after the country witnessed unprecedented rebellion against the ruling Communist party's zero-Covid policies, China has eased the stringent curbs in many cities, including Beijing, Guangzhou and Chengdu.

While many districts in Shanghai and Guangzhou, where the spread of virus is still rife, has been released from lockdown measures on Thursday, shopping malls are gradually opening in Beijing.

Several districts in Beijing have also announced that people who stay at home can avoid covid tests if they keep away from public places. Many stores in Beijing too has alerted visitors that they don't require to present a negative test when entering the shopping centers, Chinese state-backed media Global Times reported.

The cities of Chengdu and Tianjin too have announced they would not require subway users to show negative COVID tests.

This sudden change in policy comes as China witnessed mass protests over the last week as thousands took to the streets demanding President Xi Jinping step down. The Communist Party leaders also seemed to back down from their constant warnings about the "deadly virus," as evident from country's vice-premier's statement that China was facing a "new situation".

Vice-premier Sun Chunlan said the virus' ability to cause disease was weakening. "With the decreasing pathogenicity of the Omicron variant, the increasing vaccination rate and the accumulating experience of outbreak control and prevention, China’s pandemic containment faces a new stage and mission," Sun was quoted by Reuters.

This could also hint that China is trying to reverse its policies though it is unclear to what extend the party will go to make the shift. This is because the numero uno proponent of the zero-Covid policy is none other than Chinese president Xi Jinping himself. Rolling back his policies and ideas could mean undercutting his authority.

China's Covid numbers continue to remain high even though much of the world have recovered from the infection.On Wednesday, the country recorded its highest number of daily Covid cases since the pandemic began - with more than 36,000 cases.

The reversal of curbs and easing of lockdowns have brought cheer to Chinese people in many parts of the country, but some are apprehensive for the infection rate still remains high.

The elderly, many of whom are still unvaccinated, are anxious about the new situation, reports Reuters.

"Finally, we can slowly return to our normal lives," Lili, 41, who works for a chain of restaurants in Guangzhou, told Reuters. She added that the lockdown interruptions over the last few years resulted in a 30% drop in earnings.

"The public could not stand it any longer, and everyone wished that we could reopen ... The Guangzhou government probably heard what we were asking for and thought it was about time," Lili added.