6,000 broad sectors of India to get duty-free access to Australian market 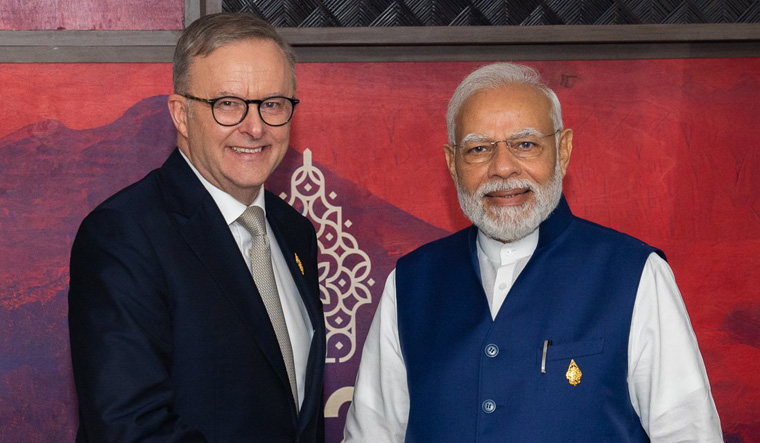 India and Australia would now implement the free trade agreement on a mutually agreed date as the Australian Parliament on Tuesday approved the pact between the two countries.

"BREAKING: Our Free Trade Agreement with India has passed through parliament," Australian Prime Minister Anthony Albanese said in a tweet.

The India-Australia Economic Cooperation and Trade Agreement (AI-ECTA) needed ratification by the Australian parliament before its implementation. In India, such pacts are approved by the Union Cabinet.

The agreement was signed between the two countries in April this year. Commerce and industry minister Piyush Goyal said in a tweet, "Delighted that India-Australia Economic Cooperation and Trade Agreement has been passed by the Australian Parliament. A result of our deep friendship, it sets the stage for us to unleash the full potential of our trade ties and spur massive economic growth."

Speaking at a function here on Tuesday, Goyal said that now the Australian government will take approval from their executive council and the ministry from the Union Cabinet here. These approvals, he said, are "very much doable" quickly.

Goyal added that after then there will be harmonisation of codes and customs regime so that "we can enter into force at an early date". The deal is fair and good for India, he said.

The minister asked the steel industry to take benefit of zero duty in the Australian market and push their exports. Last week, the Joint Standing Committee on Treaties of Australia recommended the Australian government to ratify the pact.

After the ratification, both sides will decide on a date to implement the pact and customs authorities will also issue a notification a day before the implementation.

Meanwhile, Australian trade minister in a statement said that the ECTA will enter into force 30 days (or another mutually agreed time) after the respective parties have confirmed in writing that they have completed their domestic requirements.

“Australian exporters, businesses, workers and consumers will soon be able to reap the opportunities and benefits of more open trade with India with today's passage of implementing legislation through the Parliament,” it said.

"The Albanese government has worked hard to expeditiously advance all processes necessary" to ensure that Australia is in a position to implement the free trade agreements before the end of 2022,” the statement said.

The Australia-India Economic Cooperation and Trade Agreement (ECTA) is a great opportunity for Australian businesses as it will open up new markets to reach around 1.4 billion consumers in the world's fastest-growing major economy, it added.

Australia's Minister for Trade and Tourism Don Farrell said that the agreement will support businesses to grow, offer more employment opportunities, and will give Australian consumers more choice at the checkout.

He further said that Australia will work closely with the Indian government to implement the trade agreement "as soon as possible".

The agreement, once implemented, will provide duty-free access to the Australian market for over 6,000 broad sectors of India, including textiles, leather, furniture, jewellery and machinery.

Under the pact, Australia is offering zero-duty access to India for about 96.4 per cent of exports (by value) from day one. This covers many products that currently attract 4-5 per cent customs duty in Australia.

Goyal had earlier stated that the agreement would help in taking the bilateral trade from $27.5 billion at present to $45-50 billion in the next five years.