Iranian trainers were sent to help Russia with drone attacks on Ukraine: US

The recent drone attacks in Ukraine were condemned by the US 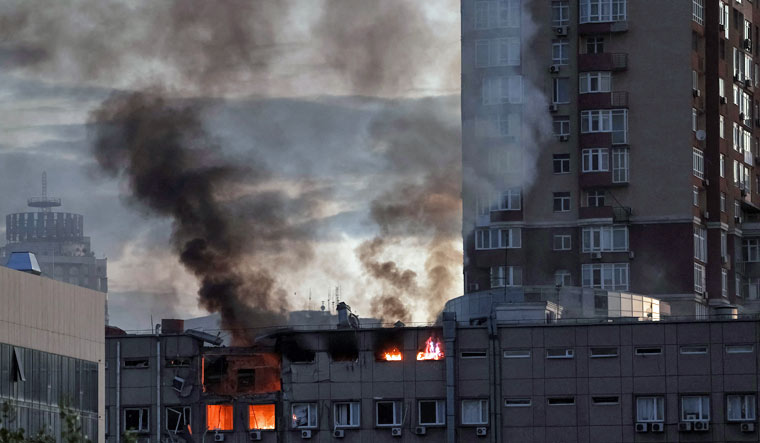 Smoke rises after a Russian drones strike, which local authorities consider to be Iranian made unmanned aerial vehicles (UAVs) Shahed-136, amid Russia's attack on Ukraine, in Kyiv, Ukraine October 17, 2022

The United States on Friday said that the Iranian military trainers were in Crimea helping Russian forces with drone attacks in Ukraine. The recent drone attacks on Ukraine's power stations had caused power outages in several parts and also have damaged key infrastructures.

Kirby while speaking to the reporters said that Iran has sent a relatively small number of personnel to Crimea, a part of Ukraine unilaterally annexed by Russia in contravention of international law in 2014, to assist Russian troops in launching Iranian-made drones against Ukraine.

"Iranian military personnel were on the ground in Crimea and assisted with these operations," Kirby said. He also said that they had evidence proving it as well.

Russians weren't familiar with the use of drones and needed help from the Iranian personnel to use them, Kirby further added.

On the recent attack of Russia on the Ukrainian capital with 'kamikaze drones,' the White House said it will hold Moscow accountable for "war and crimes".

Kirby said that the White House was going to pursue all means to "expose, deter and confront" Iran's engagements with Russia.

Condemning the Russia missile strikes, Karine Jean-Pierre, Joe Biden's press secretary said that the US will continue to aid the people of Ukraine.

After the incident of the truck exploding on the Crimea bridge, the war between Russia and Ukraine escalated.

Meanwhile, reports say that both Russia and Iran refuted the allegations of the US. Russia has denied using Iranian drones in Ukraine.