The US had no role in the attack, either by providing intel or other assistance 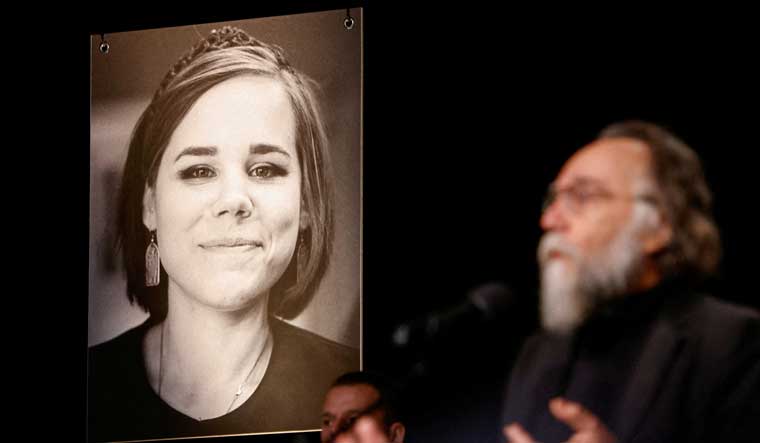 (File) Russian political scientist and ideologue Alexander Dugin delivers a speech during a memorial service for his daughter Darya Dugina, who was killed in a car bomb attack, in Moscow, Russia August 23, 2022. | Reuters

The car bomb blast that claimed the life of Darya Dugina, Russian nationalist and the daughter of prominent political figure Alexander Dugin, in Moscow was authorized by parts of the Ukrainian government, believe US intelligence agencies.

According to the officials, the US took no part in the attack, either by providing intelligence or other assistance though it is unclear whether Ukrainian President Vlodomyr Zelenskyy was aware of the plot, according to a New York Times report.

Darya Dugina, a Russian nationalist and pro-war commentator, was killed in August when a bomb tore through the Toyota Land Cruiser she was driving. Some in Russian claim her father was the actual target of the attack.

Though Russia had earlier alleged that the blast was orchestrated by Ukrainian intelligence, the latter had denied it, claiming it was not a criminal state. Oleksii Danylov, secretary of Ukraine’s National Security Council, had then stated that they "have nothing to do with the murder of this lady – this is the work of the Russian special services." However, the US intel now seem to corroborate Russia's claims.

The report added that the US officials were in the dark about the plot and would have opposed the killing had they been consulted. They also admonished Ukrainian officials over the assassination. However, the US officials did not say who "delivered the admonishments" and who was at the receiving end.

Ukraine has, however, denied the intelligence report and continued to claim that they had no role in the murder, adding that their agency had no new information in this regard.

“We have other targets on the territory of Ukraine," he said, "I mean collaborationists and representatives of the Russian command, who might have value for members of our special services working in this program, but certainly not Dugina."

The report also quoted an unnamed senior Ukrainian military official who claimed the Ukrainian forces had carried out assassinations and attacks on accused Ukrainian collaborators and Russian officials. This includes the Kremlin-installed head of the Kherson region who was allegedly poisoned by his maid.