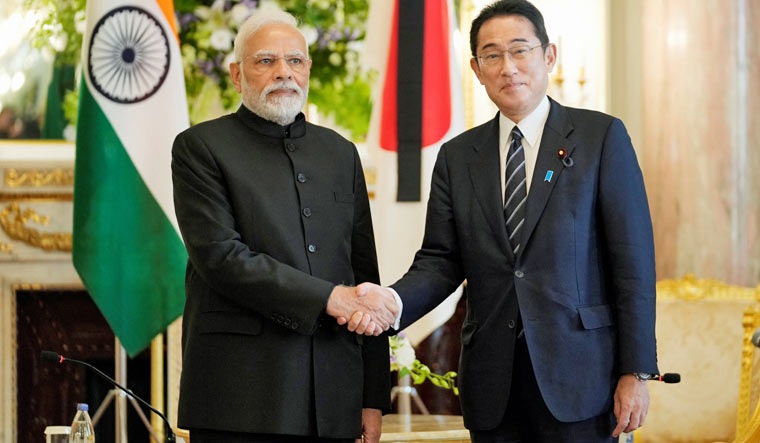 Prime Minister Kishida made the remarks during his bilateral meeting with Prime Minister Modi who is here to attend the state funeral of Abe.

Abe, 67, was shot dead while making a campaign speech on July 8 in the southern Japanese city of Nara.

Kishida expressed his intention to continue working with Prime Minister Modi to realise a "Free and Open Indo-Pacific," building on the diplomatic legacies of former Prime Minister Abe, the Japanese Prime Minister's Office said in a statement.

He stated that the period from this year, which marks the 70th anniversary of the establishment of Japan-India diplomatic relations, to next year, when Japan and India will respectively assume the G7 and G20 presidencies, offers an excellent opportunity to further strengthen the "Japan-India Special Strategic and Global Partnership."

The two leaders also exchanged views regarding the regional situation, including the situation in Ukraine. They reaffirmed their shared recognition of the importance of peaceful settlement of disputes.

They also underlined the importance of "transparent and comparable development finance" for the sustainable development of poorer countries, in an apparent reference to China's alleged "debt-trap diplomacy" using loans as leverage to gain concessions from borrowing nations.

Modi and Kishida also agreed to continue working together in view of Japan and India's respective presidencies of the G7 and G20 next year, the statement added.

The Ministry of External Affairs in a brief statement said that the two leaders had a productive exchange of views on further deepening bilateral relations. They also discussed a number of regional and global issues.

During the bilateral meeting, Prime Minister Modi underlined Abe's contributions in strengthening India-Japan partnership as well in conceptualising the vision of a free, open and inclusive Indo-Pacific region.

The United States, India, Japan and Australia compose the Quad, a four-way grouping. They have been stepping up cooperation in various fields such as defence and energy amid China's increasing military and economic clout in the region.

Kishida visited India for the annual summit in March while Modi visited Japan for the Quad Leaders' Summit in May.

"These meetings underscored the two leaders' commitment towards deepening India-Japan ties, particularly in the context of shaping a post-pandemic regional and global order," Foreign Secretary Vinay Kwatra said on Monday ahead of the Prime Minister's visit to Japan.

Kwatra said there is deep convergence between India and Japan in the Indo-Pacific region.

China claims nearly all of the disputed South China Sea, though Taiwan, the Philippines, Brunei, Malaysia and Vietnam all claim parts of it.

Beijing has built artificial islands and military installations in the South China Sea. China also has territorial disputes with Japan in the East China Sea.

Last week, the Quad grouping of India, Australia, Japan and the United States strongly opposed any unilateral actions that seek to change the status quo or increase tensions in the Indo-Pacific, amidst China's increasingly intimidatory behaviour in the region.