Dianov's daughter has started a fundraiser for the soldier's treatment 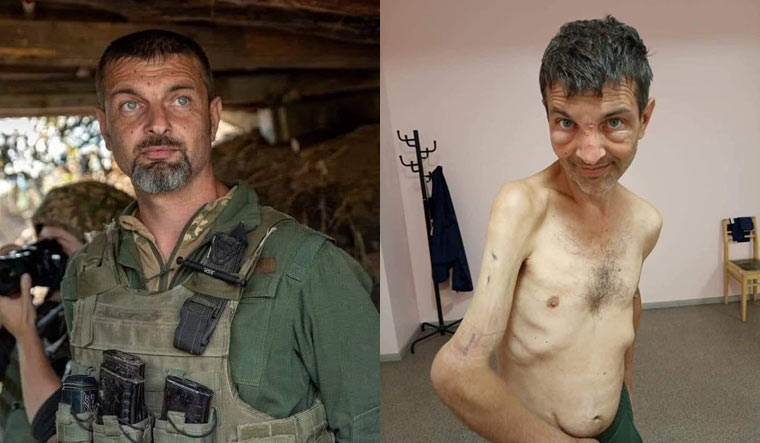 Shocking images of a Ukrainian soldier who was released from Russian captivity have surfaced on social media. The images were shared by the Ukrainian defence ministry on Twitter-- calling him one of the lucky ones despite him appearing emaciated and with injuries on his face and arms.

"Ukrainian soldier Mykhailo Dianov is among the fortunate ones: in contrast with some of his fellow POWs, he survived Russian captivity," the defence ministry wrote in the caption. "This is how Russia "adheres" to the Geneva Conventions. This is how Russia continues the shameful legacy of Nazism," it read.

Dianov, one of the 205 Ukrainian prisoners of war released on Wednesday, was fighting to defend the Azovstal steel works in Mariupol. Dianov is at the Kyiv Military Hospital, where his sister said he remains in a serious condition and will require long-term treatment, the Telegraph reported.

A May photo of him showed Dianov flashing a peace sign. The image showed his arm in a cast, which was pinned together after it was shattered during the Russian siege of the industrial site in the port city. In the latest image of Dianov, he looks emaciated with scars and bruises on his arm and face. Dianov was captured with a group of men, who were part of the Azoz military unit after the battle of Mariupol. They, faced four months in a Russian prison camp.

Dianov's sister  Alona Lavrushko told the Telegraph that shrapnel in his brother's arm was pulled out "without anaesthetic, without anything, using rusty pliers". "The doctor in the military hospital has taken a look at him. They're not going to operate on him just yet; he needs to gain some weight first. That's the main thing because he can't be operated on in his condition. It could be dangerous for his health. So he has to recover now and gain strength. His physical condition is serious, of course," she added.

Dianov's daughter has started a fundraiser for the soldier's treatment and rehabilitation.