Over 1,045 people were detained in Moscow 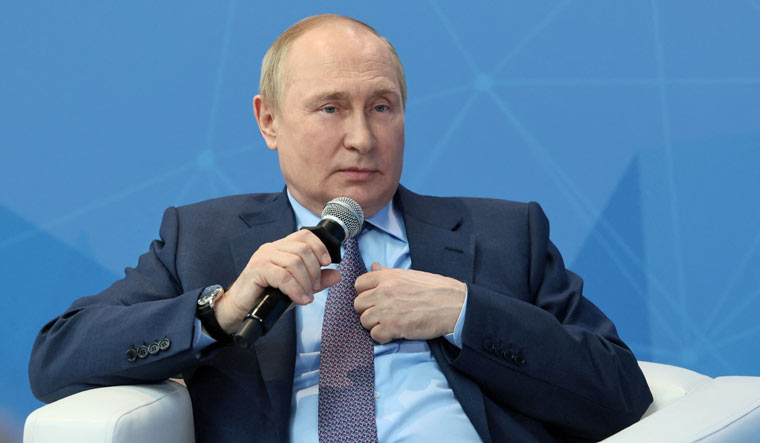 A day after Russian President Vladimir Putin announced partial mobilisation in his country, widespread anti-war protests broke out across the country, leading to the arrest of over a thousand people.

According to reports, many in the crowd that thronged the Isakiivskiy Cathedral were also heard chanting "no mobilisation." Many of the protestors were reportedly forcefully moved by the police.

The demonstrations have also prompted the Moscow prosecutor's office to warn that anyone who heeded the calls on the internet to join unauthorised street protests could incur up to 15 years in jail.The protestors could also face prosecution under laws against discrediting the armed forces, spreading "fake news" about Russia's military operation in Ukraine, or encouraging minors to protest.

Meanwhile, Ukrainian President Volodymyr Zelensky, who remotely addressed the 77th session of the United Nations General Assembly at the UN headquarters in New York City, has called for "just punishment" for the crimes Russia has committed since the invasion of Ukraine.

He said Ukraine wanted Russia punished for trying to steal territory for the murder of thousands of people and the torture and humiliation of women and men.

Earlier, during his address, US President Joe Biden had said Russia has shamelessly violated the core tenets" of the United Nations charter with its brutal, needless war in Ukraine. He also said Russian President Vladimir Putin's new nuclear threats against Europe showed reckless disregard for his nation's responsibilities as a signatory of the Treaty on the Non-Proliferation of Nuclear Weapons.

"Now Russia is calling up more soldiers to join the fight, and the Kremlin is organizing a sham referendum to try to annex parts of Ukraine — an extremely significant violation of the UN charter," Biden added.

Meanwhile, the United States National Security Advisor (NSA) Jake Sullivan said the US had welcomed Prime Minister Narendra Modi's statement to Putin that "today's era is not of war."

Addressing a press conference at the White House, Sullivan said what Modi said was "a statement of principle on behalf of what he believes is right and just (and) it was very much welcomed by the US."