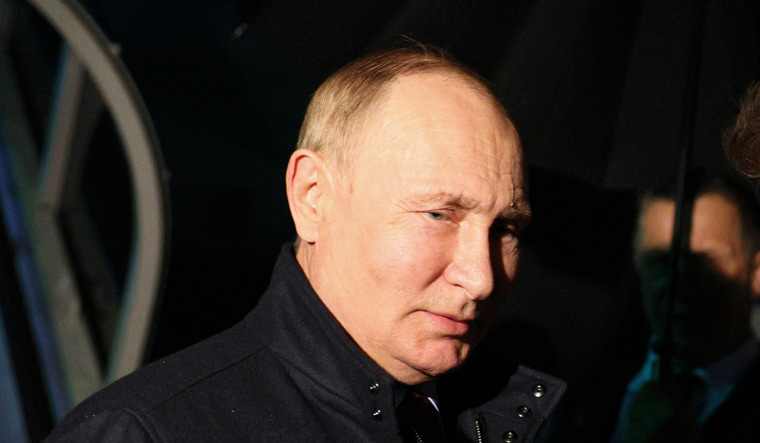 In a televised pre-recorded announcement aired at Russia's state-backed RT, Putin said the West wants to "destroy our country" and has "turned Ukraine’s people into cannon fodder."

He said the partial mobilisation of its two million-strong military reserves was to defend Russia and its territories. "To protect homeland, its sovereignty...I consider it necessary to support the decision of the General Staff on partial mobilisation," he was quoted by Reuters.

Putin also commented on the referendum planned for the four regions of Luhansk, Kherson and partly Russian-controlled Zaporizhzhia and Donetsk regions in Ukraine. The Russian president said his aim was to 'liberate' east Ukraine’s Donbas industrial heartland region and that most people in the region did not want to return to what he called the "yoke" of Ukraine.

These four regions make up to 18 per cent of Ukraine’s territory and the polls are scheduled to begin on September 24.

Putin minced no words attacking the West, warning that Russia would respond with all its might if the West continued with its "nuclear blackmail." He added that Russia had "lots of weapons to reply" and that he was not bluffing.

According to RT News, the partial mobilisation would target Russia’s military reserves, and the efforts would begin Wednesday as the decree has been signed.

"Only those citizens currently in the reserve will be subject to a call-up for military service, first and foremost those who have served in the ranks of the Armed Forces," Putin said in the pre-recorded video address. The reservist will be provided with additional training along with all the benefits due to people involved in active duty.

Meanwhile, Defence Minister Sergei Shoigu has said that the decree would see 300,000 additional personnel called up to serve in Russia’s military campaign in Ukraine. He said students and those who served as conscripts would not be called up, and that the majority of Russia’s millions-strong reserves would not be drafted.

This comes as the Western nations have refused to acknowledge the referendums in parts of Ukraine that are currently under Russian control. While the US, Germany and France had called the attempt "sham" ballots, Ukraine's President Zelensky has dismissed the referendums, stating it stemmed from the "fear of defeat."

According to experts, the referendums could result in the Russian annexation of the areas and would enable Kremlin to portray the current Ukrainian pushback as "an attack on Russia." These would contribute to an escalation of Russian military action in Ukraine.