Cautions against creating atmosphere of fear 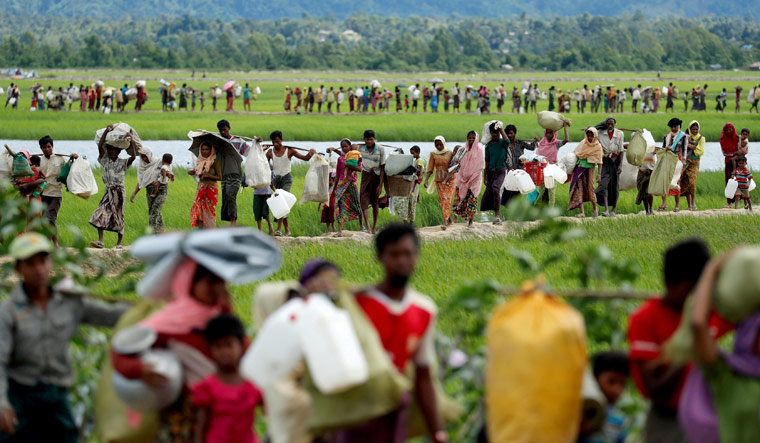 [File] Rohingya, who crossed the border from Myanmar, continue on to the refugee camps near Cox's Bazar, Bangladesh | Reuters

After registering international protests over Myanmar Junta government’s reluctance to take back Rohingya refugees “temporarily” settled in Bangladesh’s Cox Bazar, the Bangladesh government has protested against violent incidents near the Bangladesh-Myanmar border.

Said a foreign ministry spokesperson in Bangladesh, “We have lodged strong protests with Myanmar over the intrusion of mortar shells, aerial firings and airspace violations from Myanmar, causing death and injuries to the people inside Bangladesh territory.”

“The envoy was told that the government of Myanmar was responsible for maintaining the security inside Myanmar as well as for ensuring that no violation of the border and airspace with neighbouring Bangladesh took place,” said the foreign ministry spokesperson.

The Bangladesh Ministry of Foreign Affairs also reiterated that Bangladesh would never be used by “insurgent groups” threatening the security of Myanmar as alleged by Myanmar against India and Bangladesh. “We have a zero-tolerance policy of the Government of Bangladesh on terrorism and the non-harbouring of any elements hostile to the security of the neighbouring countries,” read the statement.

Bangladesh officials said that Myanmar has been cautioned that the ongoing situation was creating an atmosphere of fear among the innocent people living in the bordering areas of Bangladesh and Myanmar. Bangladesh urged Myanmar to refrain from activities that damage the life and livelihood of the area's people.

In a significant move, Bangladesh has also demanded that Myanmar should take immediate steps to stop “reckless military actions” near the border and ensure that no ammunition from Myanmar falls inside Bangladesh territory.

“The Myanmar envoy was also reminded that the ongoing situation was detrimental in kickstarting the repatriation process of the forcibly displaced Myanmar nationals temporarily sheltered in Bangladesh on humanitarian grounds,” said the spokesperson.

Recently while visiting India on a bilateral tour, Bangladesh Prime Minister took up the situation of Myanmar with Prime Minister Narendra Modi and urged him to create an international opinion to bring back democracy in Myanmar, confirmed a source in Bangladesh High Commission in India.