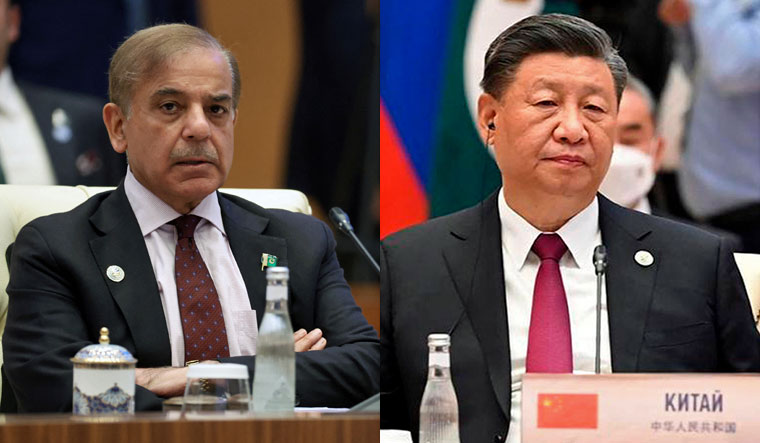 President Xi Jinping on Friday called on Pakistan to provide "solid protection" for hundreds of Chinese working on the CPEC projects in the country and build stronger synergy between the development of strategies of the all-weather allies as he met Prime Minister Shehbaz Sharif in the historic Uzbek city.

Xi and Sharif met on the sidelines of the Shanghai Cooperation Summit in Samarkand during which the two countries signed documents on cooperation in railway, e-commerce and other areas, China's state-run Xinhua news agency reported.

Details of the agreements were not disclosed.

"China hopes that Pakistan will provide solid protection for the security of Chinese citizens and institutions in Pakistan as well as the lawful rights and interests of Chinese businesses," Xi told Sharif, airing Beijing's concern over recurring terror attacks on the Chinese workers.

China has deployed hundreds of its personnel in a host of projects of the $60 billion China-Pakistan Economic Corridor (CPEC) in Pakistan.

Recent reports said trouble is brewing between the all-weather friends with China increasingly getting critical of Pakistan's failure in protecting Chinese workers who came under periodic attacks from the militant groups.

In April, three Chinese were killed in a suicide bombing in Karachi University carried out by the separatist Baloch Liberation Army, which is opposed to China's investments in Balochistan accusing China and Pakistan of exploitation of the resource-rich province.

Some of the other attacks were also attributed to radical Islamic militant outfits in Pakistan.

With recurring attacks, China is reportedly pressing Pakistan to permit the Chinese agencies to provide security for their personnel which, according to the media reports, Islamabad is resisting as it meant boots on the ground for China's armed forces.

China is also concerned over the acute financial crisis faced by Pakistan, prompting Beijing to step in periodically to bail out Islamabad with the induction of foreign exchange loans.

According to Pakistani media reports, China is also concerned about the slow pace of progress of the CPEC projects. Chinese investors were also reportedly irked by Islamabad's failure to honour its contractual obligations under the CPEC framework.

The CPEC is showcased by China as the flagship project of Xi's multibillion Belt and Road Initiative (BRI). India has protested to China over the CPEC as it is being laid through the Pakistan-occupied Kashmir (PoK).

Pakistan has recently decided to scrap the CPEC Authority created by the previous Imran Khan government over the slow pace of the projects.

Xi stressed that the two sides must continue to firmly support each other, foster stronger synergy between their development strategies, and harness the role of the Joint Cooperation Committee of the CPEC to ensure smooth construction and operation of major projects.

It is important to expand cooperation in such areas as industry, agriculture, science, technology and social welfare to create new impetus for the CPEC's development, he said.

Highlighting the close ties between China and Pakistan, Xi said the two countries have all along stood with each other through thick and thin. No matter how the international situation evolves, China and Pakistan are always each other's trustworthy strategic partners, he said.

He also said the two sides need to enhance communication and collaboration within the United Nations, the SCO and other multilateral platforms to voice the developing countries' rightful opposition to bloc confrontation and commitment to multilateralism.

For his part, Sharif expressed appreciation to the Chinese side for its timely and valuable support as Pakistan has been affected by the recent serious flooding.

Pakistan will make its best efforts to protect the security of Chinese citizens and institutions in Pakistan, continue its active participation in the Belt and Road cooperation and make the CPEC a model of mutually beneficial cooperation, he said.

Sharif praised Xi's leadership, saying the Chinese President is a leader of strategic foresight and under his strong leadership China has secured great achievements in its development and made important contributions to peace and development in the region and the wider world.

The Pakistani people hold President Xi in a high esteem and view China as an eternal, great friend of Pakistan, Sharif added.

He also said Pakistan wishes the upcoming 20th National Congress of the ruling Communist Party of China a full success.

The Congress, which is to meet on October 16, is widely expected to endorse an unprecedented 3rd term for Xi. All his predecessors retired after two five-year terms.

In a veiled criticism against the US moves backing independence of Taiwan, which China considers as part of its mainland, Sharif said Pakistan is firmly committed to the 'one-China' policy.

Pakistan firmly supports China's position on issues concerning its core interests including Taiwan, Xinjiang and Hong Kong, he said, adding that Pakistan is resolutely opposed to the attempt of certain forces to undermine China's sovereignty and to interfere in its internal affairs.

The Pakistan-China friendship is unbreakable and unparalleled, Sharif said, adding that Pakistan will work with China to take their bilateral relationship to a new height.