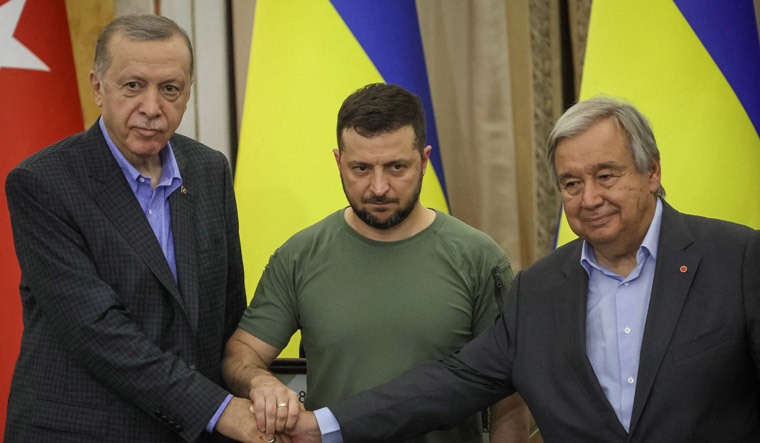 United Nations Chief António Guterres said that any potential damage to Zaporizhzhia nuclear plant would be suicidal and demanded that the area must be demilitarized.

Addressing presspersons in Ukraine, Guterres said, “The area needs to be demilitarized, and we must tell it as it is: Any potential damage in Zaporizhzhia is suicide.” Turkish President Recep Tayyip Erdogan and the UN Chief met with Ukraine President Volodymyr Zelenskyy in Lviv on Thursday.

Erdogan likewise expressed concern over the fighting around the plant, saying, “We don't want to experience another Chernobyl," a reference to the world's worst nuclear accident, in Ukraine in 1986.

Zaporizhzhia nuclear plant is said to be the largest in Europe and both countries, Russia and Ukraine, have blamed each other for shelling the plant raising concerns of a nuclear disaster.

On Thursday, the leaders discussed expanding exchanges of prisoners of war and arranging for UN atomic energy experts to visit and help secure Europe's biggest nuclear power plant, which is in the middle of fierce fighting that has raised fears of a catastrophe.

Zelenskyy condemned Russia for attacks on the plant. He called it a 'nuclear blackmail', demanded that Russian troops leave the plant and that a team from the UN's International Atomic Energy Agency be allowed in.