Why are mass shootings high in the US?

It is easy to get access to firearms in the US 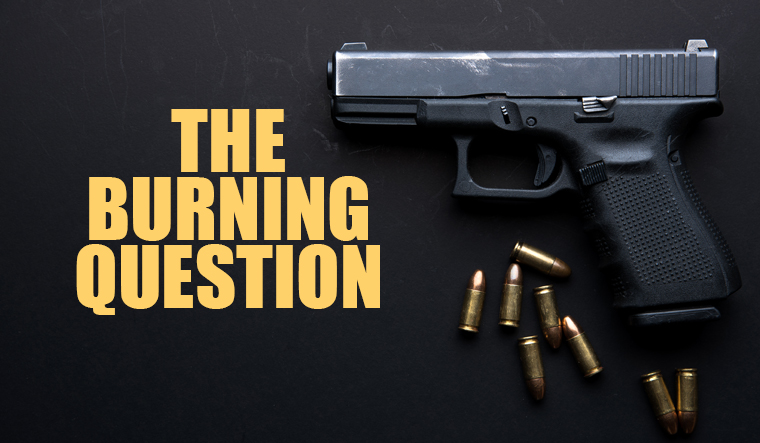 The US has reasons to be worried when it comes to gun laws and shootings. According to a 2007 survey, 88.8 civilians per 100 owned firearms.

Reasons are varied when it comes to mass shootings in the US-- it could be anything from white supremacy playing out to mental health episodes, or power as Stanislav Vysotsky, Associate Professor of Criminology, University of Fraser Valley, British Columbia says.

Gun laws are certainly lax in the US-- it is easy to get access to firearms. According to the FBI, there were 345 "active shooter incidents" in the United States between 2000-2020, resulting in more than 1,024 deaths and 1,828 injuries, a BBC report says. The mass shooting in May at Robb elementary school that killed 19 students and two teachers is the eighth such incident in 2022. on July 4, a gunman killed seven people and wounded dozens more in Highland Park, Illinois. On July 17, in Greenwood Indiana, a gunman opened fire in the food court of a mall, killing three people and wounding two. On August 1 in Columbia, Washington, one person was killed and five injured in a shooting outside an apartment complex. There are several more incidents like these.

Professor Vysotsky breaks down for THE WEEK the reasons behind mass shootings and more.

Why do you think gun crime, i.e mass shootings are so high in the US?

Reasons for mass violence due to guns are several. One of the main reasons is easy availability of firearms. There are more guns than people. But there are also other issues like a culture of hyper individuality-- the focus is primarily on individuals. Also, individuals who feel alienated feel the need to assert themselves. Another reason is history. Gun ownership and buying of firearms began during colonial times. It became normalised for people to own firearms to protect their property.

Purchase of guns went up post the shooting at Walmart and the 2018 Pittsburgh shooting at the synagogue, gun sales, in fact, went up as people feared that the firearms used in the shootings would be banned. Not only did the demand for those firearms go up, but the price also rose. Yet another reason is that a lot of content people are consuming online is manifesto content, mainly white supremacist content—white supremacy-- several sites are promoting white supremacy and a lot of alienated white people subscribe to it.

What according to you is the main reason people resort to shooting?

Sadly, there is no one reason. Though you could say it is a manifestation of power. People who feel powerless in other aspects of life-- for example employment, relationships or elsewhere, feel the need to manifest their power and hence resort to gun violence. The feeling that taking a gun and shooting these many people gives them a sense of control. But you'd think that if a person is unemployed they would do a shootout at a workplace, but, that isn't the case either. You could say another main reason is mental health, but that, in several cases is an underlying cause and not the main reason.

There are several different types of mass shootings that can happen based on the location, the identity of the shooter, and their relationship to their victims. The one thing that we can see in all violent crimes, which includes shootings, is a desire for power and control by the perpetrator. The perpetrator seeks to assert power and control over others by causing harm to people through the use of violence. So, while there may not be one specific type of cause that we can identify, there is a desire for power at the core of violence.

How powerful is the gun lobby of the rifle association?

The main reason the government isn't able to do much is that the National Rifle Association or NRA is way too powerful. They contribute immensely to legislators, other elected officials, political campaigns and more. They also have close ties with the multibillion-dollar firearms industry in the US. They point to the second amendment of the Constitution that establishes “the right of the people to keep and bear arms”.

If you log in to the NRA's website, you can see how they bait buyers. They initially push their merchandise like t-shirts, caps, duffle bags and so on-- they reel you in slowly. They also increase sales via propaganda, by using lines like 'tireless defenders of your second amendment rights' or 'dedicated to securing the future of freedom.'

First, there is a legal concept in parts of the US. known as the castle doctrine that allows a person to use deadly force against a perceived intruder to their property. Currently, 23 states have such laws. Because each state has its legal system, they vary from state to state with some being broader than others. For example, in my former home state of Wisconsin, it was legal to use deadly force against an individual if they stepped onto your property rather than entered your home and that force was legal if you perceived the individual to be threatening. In other states, these laws can apply to workplaces and cars as well as homes. In states that restrict allow such use of deadly force but have restrictions, an individual has to be in the commission of a crime or otherwise have deadly intent. This means that there is a patchwork of laws that allow people in the US to use deadly force against anyone who comes onto their property, workplace, or approaches their vehicle under a specific set of circumstances. To add to this atmosphere of violence, there is a separate set of “stand your ground” laws that state that a person has no duty to retreat in a situation where they perceive they may be killed or injured, which means that they can use deadly force against anyone they perceive to be threatening. These laws exist in 36 states. In all of these cases, the laws are unevenly applied with regard to race with white people who shoot other white people or people of colour receiving no criminal justice intervention or being found not guilty of murder under such laws at a greater rate than people of colour.