Promises to keep: I will do absolutely everything I can, says Sunak 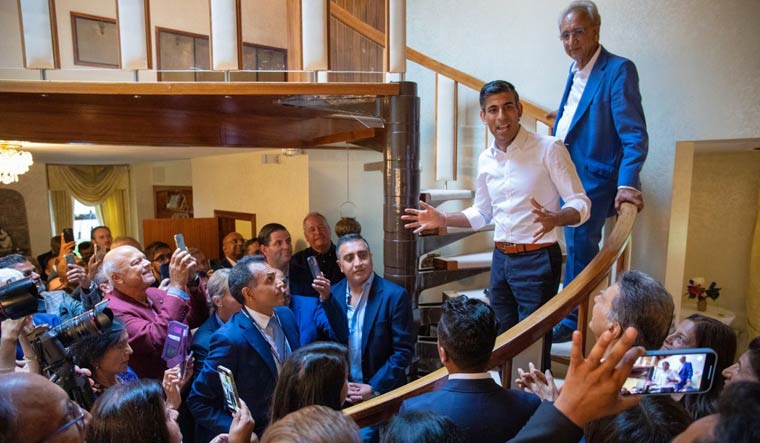 On 4 August 1972, Idi Amin gave Ugandan Asians 90 days to leave the country, which triggered a mass expulsion of 60,000 Asians and subsequent refugees across the world. Boarding their flights, these Asians, many of whom were reasonably wealthy in East Africa, had to leave everything behind, and migrate with the bare minimum- only whatever was allowed to carry. Leicester City Council published an advertisement in Uganda's newspaper 'Uganda Argus', which most Asians read. It said, don’t come to Leicester - there is no housing or schools available.

Around 27,000 of them, already British subjects with required travel documents permitted to move to the UK through Uganda Resettlement Board, arrived in the country with the hopes of new lives, some relying on relatives, friends and family already living in the country to help them find a job or new home. Women who had never worked without ample house help in Africa were seen working in factories and shops with their husbands to make ends meet.

This was exactly four years after Enoch Powell’s infamous ‘Rivers of Blood’ speech, where the Conservative MP strongly criticised mass Commonwealth immigration to the UK and proposed a race relations bill. Powell was eventually dismissed from the Shadow Cabinet by then leader Sir Edward Heath. Yet, his Conservative party won the 1970 general election and some say it was Powell’s perspective on immigration that helped the party win.

Today, Britain’s race relations may still need ample work, especially in the light of what happened during Covid-19, but an Asian man, part of whose family at one point migrated from East Africa, is standing as the Tory party leader in the contest (and as Britain’s next Prime Ministerial candidate) and that is no mean feat.

Lord Dolar Popat, is one of those Ugandan Asians who came to Britain little before the expulsion. He worked his way up and today he is one of the most well-respected and admired community leaders and businessmen.

Giving a leg up to Rishi Sunak, who is trying to convince his 160,000 Conservative party members to choose him over his opponent Liz Truss, Lord Popat organised a greet and meet at his house in Stanmore last week.

Speaking to THE WEEK, Lord Popat said, “It was an honour to host Rishi Sunak along with many supporters from across Harrow at my house. I am a big supporter of Rishi and I’m glad to play a role in helping him gain support, especially from the Indian community. I am pleased that he has reached the final two of the leadership election and I am proud to lend my support to him to become the leader of the party and our future Prime Minister. I wish Rishi all the best over the coming weeks and hope that members will lend their support to him as well.”

Rishi Sunak, whom I have had the privilege of meeting on four occasions now, including a chance to interview him exclusively while he was the Chancellor, as well as through the Indian Journalists’ Association recently just before he resigned, is as much as Indian as he is British. His Indian values drive him to pay back to his family and community, who have sacrificed immensely, to help his generation not only realise their potential but also fulfil their ambitions. And not just his parents or family- paying a tribute to everyone in the community, that has made his dreams possible, standing at Lord Dolar Popat’s house, right before the 50th anniversary of the Ugandan Asian expulsion, Sunak said, “I'm standing here because like many of you, this country did something incredible for our families. And it welcomed them here as immigrants. My mom ran the local chemist in Southampton where I grew up, my dad was an NHS GP, and I was brought up with a certain set of values. I was brought up to believe that family is everything and family provides the bond that no government could hope to replicate.

“If I'm fortunate enough to get this job, I will give you everything I have got my heart and soul into delivering those Conservative values that we hold dear into action for our country. I will give everything I've got into working with you to make sure that we win our elections council by council, all the way up to the general election because I know the efforts and the sacrifices and the hard work that many of you in this room starting with Dolar (Lord Popat) did decades ago, to pave the path for me to stand here today and be on the precipice of being our first ethnic minority Prime Minister. To repay that debt, I will do absolutely everything I can, to make all of you as proud as I possibly can as your Prime Minister.”

Though his allies have been saying that he is a victim of a “smear campaign” and “latent racism” from party members because of his ethnic heritage and values, in an interview with The Daily Telegraph, he has clarified saying all that the party members are trying to figure out is the best option for themselves but denied that “gender, ethnicity and everything else” has anything to do with it.

Sunak was born and raised in Southampton in the south of England and later went to Oxford and Stanford University. As an MP he represents Richmond (Yorks) in North Yorkshire since 2015. According to the 2011 Census, 95.8 per cent of the population of that area is white British, with only 1.4 per cent Asians. This says something about his core personality.

Though he is trailing behind Ms Truss by marginal points, ultimately the contest stands on one major deciding factor— money. It depends on who will save more taxes for Britons, save the free healthcare or NHS from disintegrating entirely and help the public survive the hell of spiralling cost of living and soaring energy prices.

While 31per cent of Tory members is reportedly supporting Mr Sunak, compared to 49 per cent intending to vote for Ms Truss, 15 per cent are still waiting to decide. Truss already has a flood of endorsements. From current Chancellor Nadhim Zahawi to Brandon Lewis to the latest addition of Penny Mordaunt – now on her side. But anything can happen between now and September 5. Sunak, driven by his inherent personality trait and community zeal, has not learned to give up or fear hard work. And that may be a sign that this wind of race can change, unexpectedly and definitely very quickly.