Xi, Biden to speak on Thursday 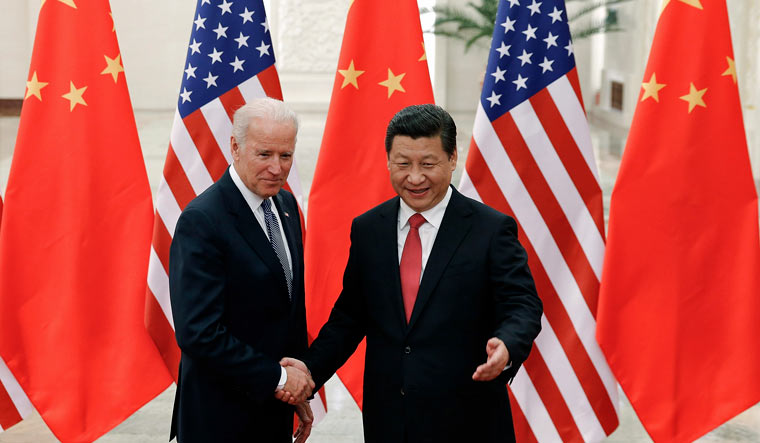 US President Joe Biden with his Chinese counterpart Xi Jinping

Presidents Joe Biden and Xi Jinping will speak Thursday, according to a US official, their first conversation in four months coming amid new tension between Washington and Beijing over China's claims on Taiwan.

Managing economic competition between the two countries would be a focus of the call, White House national security spokesperson John Kirby told Reuters.

The planned talks between the two leaders the fifth in a series of regular check-ins have been in the works for weeks.

The possibility of a visit to Taiwan by House Speaker Nancy Pelosi, the top congressional Democrat and second in line of succession to the presidency, has caused Beijing to issue warnings to the Biden administration, adding fresh strain to the complicated relationship.

Of the topics likely to be discussed, Kirby said, it would be "Everything from the tensions over Taiwan to the war in Ukraine, as well as how we better manage competition between our two nations, certainly in the economic sphere."

It's important for us to show support for Taiwan, Pelosi said. None of us has ever said we're for independence when it comes to Taiwan. That's up to Taiwan to decide.

The US is bound by law to assist Taiwan with means to defend itself, however, under Beijing's one-China policy, the US does not have official relations with Taiwan, a stance, the White House has maintained that it hasn't changed despite a possible trip by Pelosi. The US has been considering if it should ease tariffs on some Chinese goods to boost the US economy.

Administration officials have privately stressed to Pelosi that travelling to Taiwan could further complicate a delicate status quo. Chinese officials aren't mincing words, sending a message that a visit by Pelosi would be viewed as a change in US policy and treated as a provocation.

If the US insists on going its own way, China will take forceful measures to resolutely respond and counter it, and we will do what we say, said Chinese Foreign Ministry spokesperson Wang Wenbin.

White House national security adviser Jake Sullivan said Friday he fears that Beijing might be gleaning some concerning takeaways from the five-month-old war in eastern Europe. But he suggested the moment has also led to careful reflection in Taipei.

“Not as many people ask Is Taiwan learning lessons from Ukraine?' and you can bet they are,” Sullivan said during an appearance at the Aspen Security Forum. They're learning lessons about citizen mobilization and territorial defence.