Iran to keep IAEA cameras shut until JCPOA is revived

Talks to revive JCPOA have been stalled since March 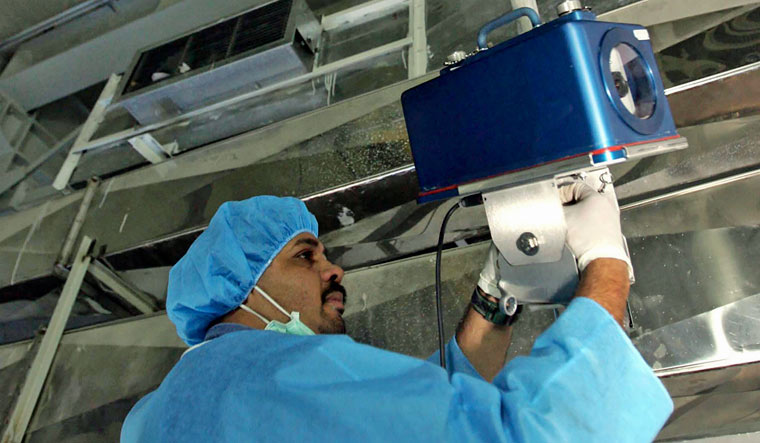 An inspector of the International Atomic Energy Agency sets up surveillance equipment, at the Uranium Conversion Facility of Iran, just outside the city of Isfahan, Iran, Aug. 8, 2005. Iran turned off two surveillance cameras of the United Nations' nuclear watchdog that monitored one of its atomic sites, state television reported Wednesday, June 8, 2022 | AP

Iran has said it will keep UN watchdog International Atomic Energy Agency's (IAEA) camera turned off until the 2015 JCPOA deal is restored, Tasnim news agency reported. The country's Atomic Energy Organization said on Monday that it had removed IAEA equipment including 27 cameras installed in 2015 under the pact with world powers.

“We will not turn on the IAEA cameras until the other side returns to the nuclear deal,” Iranian nuclear chief Mohammad Eslami told Reuters.

France's President Emmanuel Macron on Sunday "expressed his disappointment" at the lack of progress in the talks to revive the nuclear deal with Iran.  Macron on Saturday told his Iranian counterpart Ebrahim Raisi over the phone that reviving the 2015 nuclear deal was "still possible," DW reported.

Negotiations between Iran and other signees of the JCPOA pact have been stalled since March. The 2015 pact had imposed a curb on Iran's nuclear activities in return for lifting economic sanction. In 2018, the then US president Donald Trump pulled the US out of the deal and imposed tough economic sanctions on Iran.