Covid-19 pandemic is changing but it is not over: WHO chief

'Cases are on the rise in 110 countries' 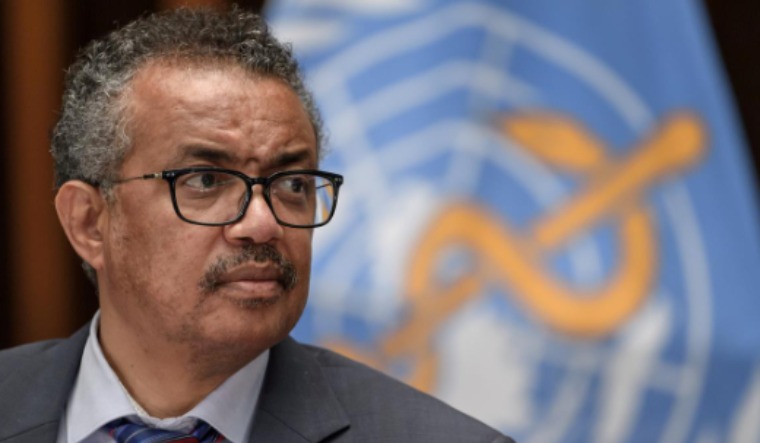 The Covid-19 pandemic is changing but it is not over, the head of the World Health Organization said on Wednesday, cautioning that the cases are on the rise in 110 countries and are being driven mainly by two fast-spreading Omicron sub-variants.

The Centers for Disease Control and Prevention said this week that the fast-spreading Omicron sub-variants BA.4 and BA.5 together are estimated to make up half of the coronavirus cases in the United States.

"On COVID-19, driven by BA.4 and BA.5 in many places, cases are on the rise in 110 countries, causing overall global cases to increase by 20 per cent and deaths have risen in three of the six WHO regions even as the global figure remains relatively stable," WHO Director General Tedros Adhanom Ghebreyesus said.

Ghebreyesus said the ability to track the virus is "under threat" as reporting and genomic sequences are declining, making it harder to track Omicron and analyse future emerging variants.

The WHO chief also voiced concern over the slow pace of vaccination in lower-income countries, making the at-risk population in those areas more vulnerable to future waves of the virus.

"We’re close to the mid-point of the year, which is the point at which WHO had called on all countries to vaccinate at least 70% of their population," he said, adding that in the past 18 months, more than 12 billion vaccines have been distributed around the world and 75 per cent of the world’s health workers and over-60s are now vaccinated.

The Lancet estimates that 20 million lives have been saved because of vaccines.

"On the flip side, hundreds of millions of people, including tens of millions of health workers and older people in lower-income countries remain unvaccinated, which means they are more vulnerable to future waves of the virus," he said.

Ghebreyesus said while the hoarding of vaccines by rich and manufacturing countries was the major barrier to access last year, increasingly political commitment to getting vaccines out to people - and challenges of disinformation have been hurdles at the national level in 2022.

"With only 58 countries hitting the 70 percent target, some have said it’s not possible for low-income countries to make it," he said.

The WHO Chief cited the example of Rwanda where second dose vaccination rates are now above 65 per cent and still rising.

Countries like Nepal and Cambodia "have shown it’s possible," he said, adding that the average rate in low-income countries is 13 per cent.

"But if there is enough political will domestically, support to ensure rollouts to communities and disinformation tackled, high vaccination rates are entirely achievable," he said.

Ghebreyesus underlined that going forward to prevent deaths and severe disease, it is important to keep the most at-risk groups up to date with vaccination.

He said that in all countries, 100 per cent of at-risk groups should be vaccinated and boosted as soon as possible.

"Even relatively ‘mild’ cases are disruptive and damaging, keeping children out of school and adults from work, which causes further economic and supply chain disruption. Do I think countries should continue to vaccinate 70 percent of the population, starting with the most vulnerable? Yes, I do," he said.

On the research and development front, Ghebreyesus said it is critical that there be funding for second-generation vaccines as well as tests and treatments.

"While honing vaccines to the evolving virus variants makes sense, I am concerned that the pace of mutation means the world is continuing to play catch up. Building on existing vaccines that limit severity and prevent death, developing second generation vaccines that stop or at least lower infection would be a major step forward," he said.

He said the ideal solution would be the development of a "pan-coronavirus" vaccine that covers all the variants so far and potentially future ones.

"This is feasible, WHO continues to convene scientists and researchers and there has been a lot of research into this virus and understanding immunology overall," he said.