Sri Lanka has petrol for one more day; next 2 moths will be toughest, warns Wickremesinghe

'We must prepare ourselves to make some sacrifices, face challenges of this period' 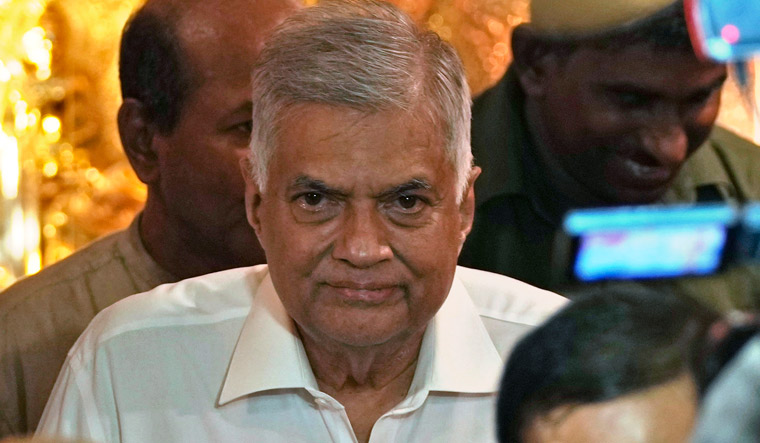 Sri Lanka's newly-appointed Prime Minister Ranil Wickremesinghe, on Monday, warned that next two months would be the toughest and said his aim is to save the country from the ongoing economic crisis, and not a person, family or group, in an apparent reference to the Rajapaksa family and its former strongman Mahinda Rajapaksa.

In his first televised address to the nation after becoming the prime minister last week, the 73-year-old United National Party (UNP) leader also said US dollars will be sourced from open markets to pay for petrol, crude, furnace oil shipments currently in Sri Lankan waters.

Wickremesinghe was appointed as Sri Lanka's 26th prime minister on Thursday as the country was without a government since Monday when prime minister Mahinda Rajapaksa resigned after violence erupted following an attack on the anti-government protesters by his supporters.

"I am undertaking a dangerous challenge... I am wearing shoes with sharp nails that cannot be removed...I am accepting this challenge for our nation. My goal and dedication is not to save an individual, a family, or a party. My objective is to save all the people of this country and the future of our younger generation," Wickremesinghe said.

He warned that next two months would be the toughest in the ongoing economic crisis. "The next couple of months will be the most difficult ones of our lives. We must prepare ourselves to make some sacrifices and face the challenges of this period," he said while addressing the nation on the current crisis.

Wickremesinghe said that at present the Sri Lankan economy is extremely precarious and Colombo must obtain USD 75 million within the next couple of days to ease the current queues for essentials.

"At the moment, we only have petrol stocks for a single day," he said, adding that diesel shortages would be eased thanks to the Indian credit line.

"For over 40 days 3 ships with crude oil and furnace oil have been anchored within the maritime zone of Sri Lanka. We are working to obtain dollars in the open market to pay for these shipments."

He said a quarter of electricity in Lanka is generated through oil. Therefore, there is a possibility that the daily power outages will increase to 15 hours a day.

"However, we have already obtained money to avert this crisis."

The prime minister said the entire local banking system is suffering from the dollar shortages.

He said another grave concern is the lack of medicine.

"There is a severe shortage of a number of medicines including medicine required for heart disease as well as surgical equipment. Payments have not been made for four months to suppliers of medicine, medical equipment, and food for patients. The payment owed to them amounts to SLR 34 billion," he said.

The state had been unable to pay for medicine supplies over four months now.

"In the short term, we will have to face an even more difficult time period. There is a possibility that inflation will increase further," he said.

He said he would reluctantly have to permit money printing in order to pay public service salaries. "I have no desire to hide the truth and to lie to the public. Although these facts are unpleasant and terrifying".

He said a relief budget will be introduced to replace the 2022 Development Budget.

Wickremesinghe said he would propose to privatise state carrier SriLankan Airlines, which is making massive losses at present.

"Even if we privatise SriLankan Airlines, we will have to incur the losses. These losses have to be borne also by the innocent people who have never stepped inside a plane," said the prime minister.

He thanked the opposition leader and the leaders of the political parties who replied to the letters that he sent them informing them of the current situation.

"We must immediately establish a national assembly or political body with the participation of all political parties to find solutions for the present crisis. This will enable us to discuss with all parties and to arrive at decisions for short-, medium-, and long-term action plans that will enable us to rebuild our nation within a specified time frame," he said.

Sri Lanka is going through the worst economic crisis since independence in 1948. A crippling shortage of foreign reserves has led to long queues for fuel, cooking gas and other essentials while power cuts and soaring food prices heaped misery on the people.

The economic crisis also triggered a political crisis in Sri Lanka and a demand for the resignation of the powerful Rajapaksas.

President Gotabaya Rajapaksa, who has refused to quit, appointed Wickremesinghe as prime minister last week and said a young cabinet under him would introduce key constitutional reforms to curb his powers, amid protests over the nation's worst economic crisis that ousted his elder brother Mahinda Rajapaksa who is under protection at a naval base following violent attacks on his aides.