Elections in Pak will only be held after introduction of poll reforms: Zardari 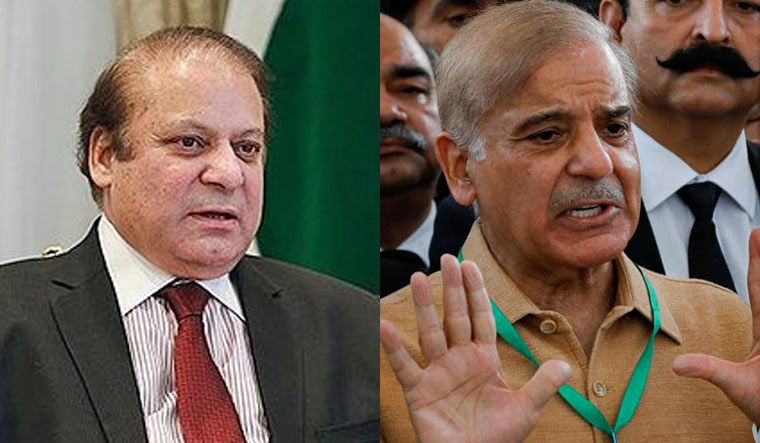 Shehbaz accompanied by a group of senior leaders of his Pakistan Muslim League-Nawaz (PML-N) party travelled to London on a private trip, according to his party members.

A video clip showed the elder Sharif patting his younger brother. A photo of the prime minister hugging his brother was also shared. Another photo showed the two Sharifs chairing the meeting.

However, no details of the meeting or its agenda have been shared so far.

The PML-N delegation dashed to London as political and economic pressure mounted on the government which is expecting organised protests by ousted premier Imran Khan who is demanding early elections.

The bigger concern is the deteriorating economic situation and inability to control the prices of daily items used by common citizens.

Khan lashed out at the trip, saying at a public meeting on Tuesday that the entire cabinet was going to meet a "corrupt and convicted" person, that too on taxpayers' money.

Earlier, PM Shehbaz Sharif, 70, departed for London via a British Airways flight shortly after midnight on Tuesday. He is expected to stay in London for two to three days.

Three-time premier Nawaz Sharif, 72, against whom several corruption cases were launched by the government of Khan, had left for London in November 2019 after the Lahore High Court granted him four-week permission to go abroad for his heart treatment.

Khan, 69, who was removed from office in early April through a Parliament vote, accused the US of conspiring to dislodge his government, citing communication from the country's ambassador in Washington. The US government has bluntly denied the allegations multiple times.

PML-N leader Shehbaz, 70, assumed the office of the prime minister on April 11. The term of the current House ends in August, 2023.

Nawaz was removed from power in 2017 after a decision by the Supreme Court against him. He was later convicted separately in two corruption cases in 2018.

Sharif was given a 10-year prison sentence for owning property in London called the Avenfield case, but was released two months later when the court suspended the sentences, pending a final judgement.

But in December 2018 he was jailed for corruption again, this time for seven years, related to his family's ownership of steel mills in Saudi Arabia called the Al-Azizia Steel Mills case.

In both cases, he failed to provide the money trail to procure these foreign assets.

Sharif was in jail when allowed to go to London for four weeks for medical treatment but never came back.


Elections in Pak will only be held after introduction of poll reforms: Zardari

The co-chairman of the Pakistan Peoples Party (PPP), Asif Zardari, has made it clear that elections in the country will only be held after poll reforms are introduced and the National Accountability Laws are amended.

Zardari, a senior political leader who played a key role in the vote of no-confidence motion moved by the opposition parties last month against former premier Imran Khan, said elections would be held once the incumbent coalition government completes both tasks.

“I have also talked to Nawaz Sharif (PML-N) on this and we agreed that we can go to polls as soon as the reforms and targets are met.

"We have to change laws and improve them and then go to elections. Whether it takes three or four months, we have to work on implementation of policies and improving the electoral process," Zardari told a press conference here on Wednesday.

He also said the coalition government headed by Nawaz Sharif's brother Shehbaz Sharif had no issue with voting rights and representation of overseas Pakistanis in elections.

Asked about Wednesday's statement by Defence Minister Khawaja Asif that one could not rule out the possibility of elections before November, Zardari said the PML-N leader had his own views and was bound to listen to his party's directives.

He said the PPP and the PML-N had decided that until electoral reforms were brought, there would be no talk about the new army chief's appointment.

Zardari also said the army was "apolitical" for the first time.