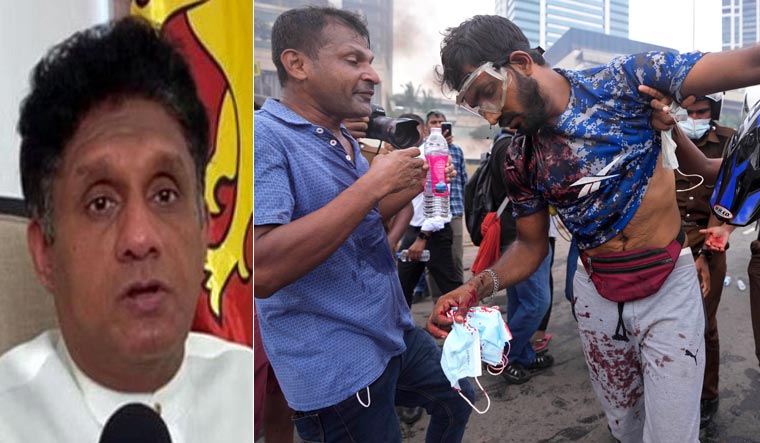 Sajith Premadasa | ANI; Anti-government protesters help a fellow protester who was beaten up by government supporters during a clash in Colombo, Sri Lanka, Monday, May 9, 2022 | AP

They then clashed with the protesters there and destroyed the protest site. The protestors then headed towards the GotaGoGama at Galle Face Green. The SLPP supporters barged through the police barrier, attacked the protesters and set fire to tents set up by them.

Opposition leader Sajith Premadasa arrived at the site alongwith JVP Leader MP Anura Kumara Dissanayake and several other trade union leaders. They were attacked by SLPP supporters and got hurt. Premadasa was escorted out immediately.

The police used tear gas and water cannons to disperse the unruly supporters. The Colombo National Hospital said that at least 16 people were admitted to the hospital so far following the incident, Colombo Gazette reported.

In a special Cabinet meeting on Friday, President Gotabaya Rajapaksa declared a state of emergency with effect from Friday midnight. This is the second time that an emergency was declared in Sri Lanka in just over a month as the island nation was in the grip of the worst economic crisis.

Sri Lanka is currently in the throes of unprecedented economic turmoil since its independence from Britain in 1948.

The crisis is caused in part by a lack of foreign currency, which has meant that the country cannot afford to pay for imports of staple foods and fuel, leading to acute shortages and very high prices.