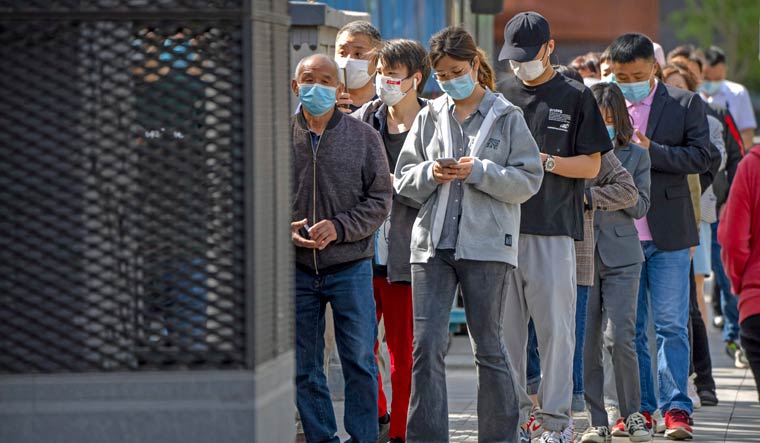 People wearing face masks stand in line for coronavirus tests in a neighborhood in the Dongcheng district of Beijing, Tuesday, April 26, 2022 | AP

Beijing city officials, on Wednesday, closed 60 subway stations-- over 10 per cent of Beijing's vast network and 158 bus routes in an attempt to rein in the spread of the highly contagious Omicron variant. China's capital city reported only 51 new cases of the virus on Wednesday, but, officials feel sporadic outbreaks of cases are a cause for concern. It isn't known when the subway services would resume.

“The number of confirmed cases in the capital in this round of outbreak has exceeded the total number in the outbreak involving the Xinfadi wholesale market in 2020,” Beijing municipal government spokesman Xu Hejian told SCMP. Beijing still requires its citizens to remain home to curb the spread of the virus.

The city seems to be gearing up for a lockdown-- restaurants are limiting service to takeout, gyms close and schools have suspended classes indefinitely. Cinema theatres and malls have closed too. One needs to provide a negative Covid test to enter supermarkets.

The city has reported about 544 cases of the Omicron variant of the virus since April 22.