The truce went into effect on April 2 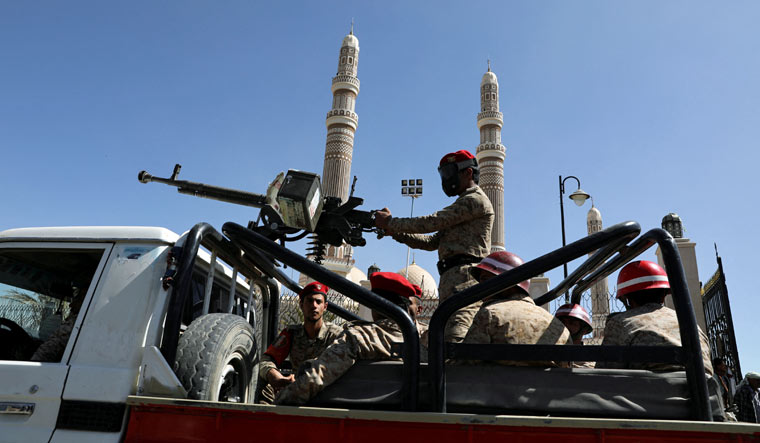 File: Military policemen ride on the back of a patrol truck at the site of a funeral of Houthi fighters killed during a fighting against government forces, in Sanaa, Yemen December 6, 2021 | Reuters

Yemen's warring parties failed to operate the first commercial flight in six years from the rebel-held capital Sunday in a blow to an already fragile truce in the country's grinding conflict.

The flight, with an Amman, Jordan destination, had been planned as part of the U.N.-brokered, 60-day truce agreement that the internationally recognized government and the Houthi rebels struck earlier this month.

The truce, which went into effect on April 2, is the first nationwide cease-fire in Yemen in six years. It came amid concerted international and regional efforts to find a settlement to the conflict that devastated the Arab World's poorest country and pushed it to the brink of famine. Yemen's brutal civil war erupted in 2014, when the Iranian-backed Houthis seized the capital of Sanaa and forced the government into exile. The Saudi-led coalition entered the war in early 2015 to try restore the government to power.

The conflict has in recent years become a regional proxy war that has killed more than 150,000 people, including over 14,500 civilians. It has also created one of the worst humanitarian crises in the world.

As part of the truce, the two sides agreed to operate two commercial flights a week to and from Sanaa to Jordan and Egypt. Sanaa is blockaded by the Saudi-led coalition.

However, both sides failed to operate the first flight more than three weeks since the truce took effect. They have traded blame for the failure.

The Houthis accused the Saudi-led coalition of failing to issue needed permits for the flight without giving further details.

Moammar al-Iryani, information minister of the internationally recognized government, said the Houthis did not adhere to the agreement by providing passengers with passports issued by the rebels.

He said the government allowed the travel of 104 passengers on the Sanaa-Amman flight but the Houthis insisted on adding 60 more passengers with unreliable passports.

The internationally recognised government announced in March 2017 that it doesn't recognize documents issued by the rebels.

A spokesman for the Houthis did not respond to a request for comment.

Hans Grundberg, the U.N. special envoy for Yemen, urged both sides to work constructively with the U.N. to address the challenges that delayed the flight.

The Truce is meant to benefit civilians including through reducing violence, making fuel available, and improving their freedom of movement to, from and within their country, he said on Twitter. He did not elaborate.

Along with the flights, the truce also included allowing 18 vessels carrying fuel into the port of Hodeida, which is controlled by the Houthis.

The sides have also yet to convene on a reopening of roads around Taiz and other provinces as part of the truce. The government accused the Houthis of delaying the meeting as they did not send their delegation's members to the U.N. envoy's office where the meeting was to be held.

The truce has resulted in a subsiding of ground and air fighting and the rebels have stopped their cross-border attacks on Saudi Arabia and the United Arab Emirates, another pillar of the anti-Houthi coalition.

Both sides, however, have reported almost daily violations of the cease-fire, especially around the government-held central city of Marib, which the Houthis have attempted to seize for over a year.