State Dept says Omar is not on a govt-sponsored visit 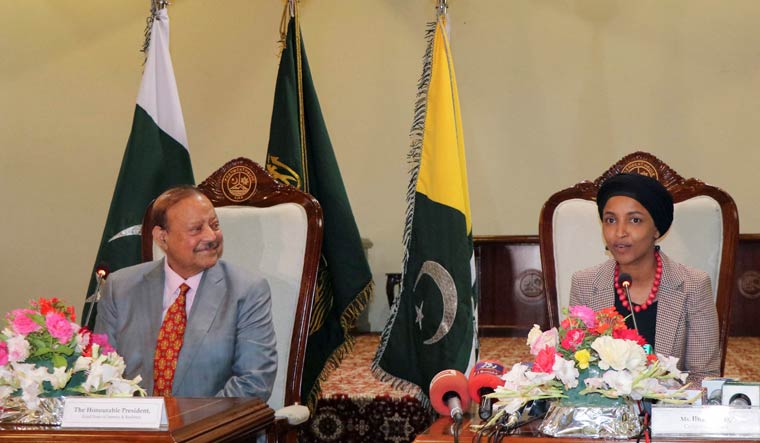 The visit of outspoken US representative Ilhan Omar to Pakistan-occupied Kashmir on Thursday had evoked a furious response from India. Omar visited PoK during a four-day trip to Pakistan.

Omar has previously been perceived as a supporter of Pakistan's line on Jammu and Kashmir. India had said Omar's visit to PoK violated the country's sovereignty and reflected her “narrow-minded” politics.

The US State Department attempted damage control on the visit on Thursday. State Department spokesperson Ned Price noted “As I understand it, Representative Omar is not visiting Pakistan on US government-sponsored travel.”

Despite the diplomatic uproar, Omar has reiterated a line on the Kashmir issue that is not palatable to India. During her meeting with Sultan Mahmood Chaudhary, the president of Azad Jammu and Kashmir (Pakistan's name for PoK), Omar referred to India's abrogation of Article 370. “We are deeply worried about the India’s 5th August, 2019 action,” she was quoted as saying by the Associated Press of Pakistan.

Associated Press of Pakistan quoted Omar as saying “she had voiced her serious concern over the human rights violations in the Indian Illegally Occupied Jammu Kashmir and would take up the issue with the US Congress as well as the Biden administration”. Chaudhary thanked her, saying “The manner in which you have condemned the human rights violations in the occupied Kashmir by India is a source of strength to us.”

Interacting with mediapersons at Muzaffarabad, Omar was quoted by Dawn as saying “I don’t believe that it [Kashmir] is being talked about to the extent it needs to be, not only in Congress but also with the [US] administration.”

She hoped her visit would lead to “many more conversations” on the Kashmir issue. “And that the condemnations and concerns of those who fight for human rights and the question of the Kashmir issue will be included in those [hearings],” she was quoted by Dawn as saying.