Curfew was imposed in the area following the violence, police said 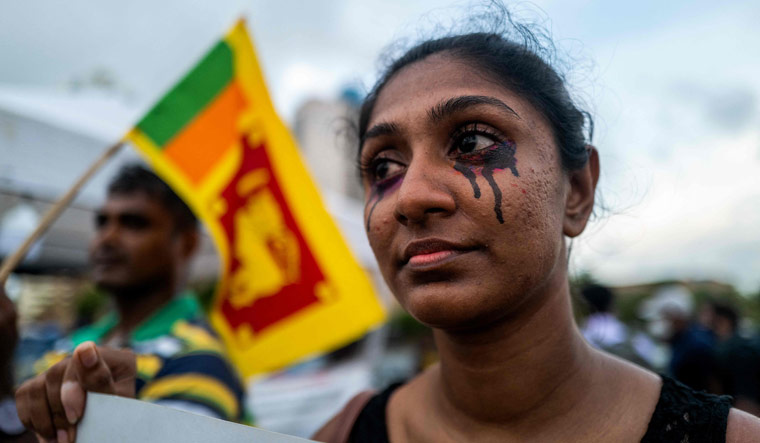 Sri Lankan police on Tuesday opened fire at anti-government protesters in southwestern region of Rambukkana, killing at least one person and injuring 12 others - the first death during the ongoing protests over the worst-ever economic crisis in the country's history.

The residents of Rambukkana - some 90 kilometres northeast of Colombo - were protesting at the latest fuel price hike when they clashed with the police.

Scores of protesters teemed the streets and public places of Rambukkana town on Monday. The demonstration went late into the night.

On Tuesday, the protesters blocked the railway track at Rambukkana. When they were asked to clear the rail line, they hurled stones at security personnel, police said.

Police spokesperson Nihal Thalduwa said police issued warnings to the protesters to leave the area. However, they attempted to set fire to a fuel bowser, as well as a three-wheeler causing damaging to property, Thalduwa was quoted as saying by News 1st channel.

Thalduwa said that the police had opened fire after initially using tear gas to disperse the crowd and bring the situation under control.

One person was killed and 12 others injured in the firing, police said.

The injured were admitted to Kegalle hospital. Four of them are in critical condition, police said.

This was the first death due to clash during the ongoing anti-government protests. Earlier, a rap musician died of a heart attack while attending the protest.

Curfew was imposed in the area following the violence, police said, adding that a number of policemen were also injured in the incident.

The Police Special Task Force (STF) was deployed in the area to control the situation.

The Human Rights Commission of Sri Lanka (HRCSL) has appointed a three-member team to investigate the incident in Rambukkana. The commission has also called for an emergency meeting on Wednesday.

Sri Lanka is grappling with unprecedented economic turmoil since independence from Britain in 1948. The crisis is caused in part by a lack of foreign currency, which has meant that the country cannot afford to pay for imports of staple foods and fuel, leading to acute shortages and high prices.

The island nation is witnessing large-scale protests against the government's handling of the debt-ridden economy - the worst-ever economic crisis in the country's history.

Protests demanding the resignation of President Gotabaya Rajapaksa and his Sri Lanka Podujana (Peramuna)-led government have intensified as shortages continued and prices soared.

Meanwhile, Minister of Transport Dilum Amunugama said public bus fares have been hiked by 35 per cent.

The minimum bus fare has been raised to Rs 27 from Rs 20. The high fuel cost has also caused a hike in bread prices. The 450 gm loaf has been raised by Rs 30, a bakery association statement read.

The stock exchange has also been suspended for a week with effect from Monday amid the economic turmoil.

Moody's Investors Service on Tuesday downgraded Sri Lanka's sovereign rating to Ca from Caa2 with a stable outlook, following a decision by the island to suspend debt payments.

Last week, the Sri Lankan government said it would temporarily default on USD 35.5 billion in foreign debt as the pandemic and the war in Ukraine made it impossible to make payments to overseas creditors.