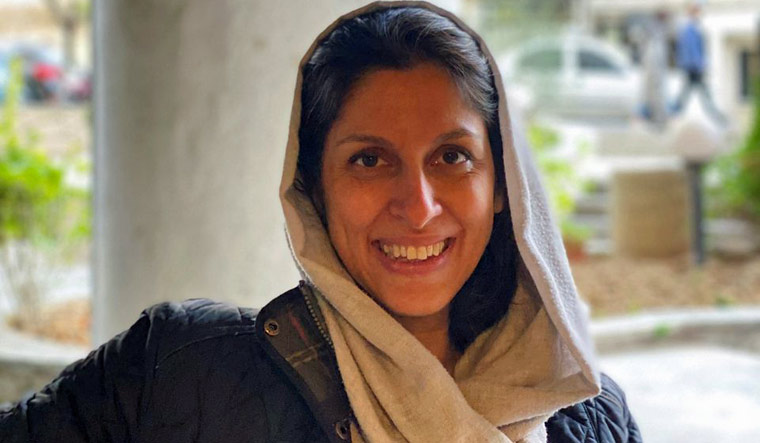 Britain's Foreign Secretary Liz Truss says she can confirm that British-Iranian dual nationals Nazanin Zaghari-Ratcliffe and Anoosheh Ashoori are returning to the UK after spending years detained in Iran.

Truss said on Wednesday the two will be with their families later Wednesday.

An Oman Royal Air Force jet left Iran just moments before lawmaker Tulip Siddiq, who represents Zaghari-Ratcliffe, tweeted that they were in the air.

Zaghari-Ratcliffe was given back her British passport over the weekend, raising hopes that her long ordeal was coming to a close.

"Nazanin is at the airport in Tehran and on her way home," tweeted UK lawmaker Tulip Siddiq, who represents Zaghari-Ratcliffe's constituency and has tirelessly pressed for her release.

"I came into politics to make a difference, and right now I'm feeling like I have.'' Iranian state media said that Britain had settled a long-overdue debt of  $530 million to Tehran."

Iran's English-language broadcaster Press TV made the announcement as Zaghari-Ratcliffe was allowed to travel to the airport with British officials.

Press TV later said that another British-Iranian dual national, Anoush Ashoori, had been allowed to travel to the airport with Zaghari-Ratcliffe. Ashoori was detained in Tehran in August 2017.

He had been sentenced to 12 years in prison for alleged ties to the Israeli Mossad intelligence agency, something long denied by his supporters and family.

A lawyer representing Zaghari-Ratcliffe in Tehran couldn't be immediately reached for comment.

British Prime Minister Boris Johnson, who is visiting the Middle East, had confirmed earlier that a negotiating team was at work in Tehran to free Zaghari-Ratcliffe.

Zaghari-Ratcliffe served five years in prison. She was later convicted of plotting the overthrow of Iran's government, a charge that she, her supporters and rights groups deny. She had been held under house arrest and unable to leave the country since her release from prison.

While employed at the Thomson Reuters Foundation, the charitable arm of the news agency, she was taken into custody at Tehran's airport in April 2016 as she was returning home to Britain after visiting family.

Rights groups accuse Iran of holding dual-nationals as bargaining chips for money or influence in negotiations with the West, something Tehran denies.

Iran doesn't recognize dual nationalities, so detainees like Zaghari-Ratcliffe can't receive consular assistance. A UN panel has criticised what it describes as an emerging pattern involving the arbitrary deprivation of liberty of dual nationals in Iran.

Family members had been optimistic since the handover of her passport, but were cautious at the positive news.

We found out about an hour ago that Nazanin had been picked up and taken to the airport with her parents. She is still actually under Iranian control in the airport,'' her sister-in-law, Rebecca Ratcliffe told the BBC. She is still not free but it definitely feels she is about to be.

Siddiq told Sky News that Zaghari-Ratcliffe remains under the authority of the Iranian Revolutionary Guard and that there has been no information about a deal. She said she had spoken with Zaghari-Ratcliffe's husband, Richard, who is taking heart from the fact that his wife is at the airport in Iran and that she has her passport.

The way he described it to me is that he feels that they can smell freedom, they just haven't grasped it yet,'' Siddiq said. As you can imagine, Richard is very emotional, patiently waiting as he has been for six years.''