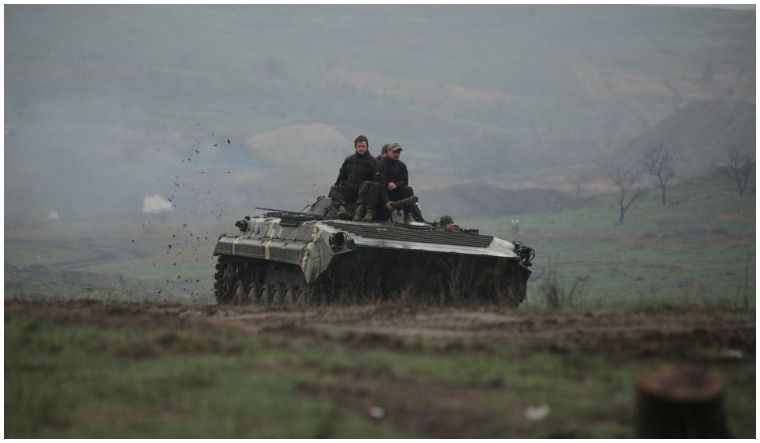 Service members of the Ukrainian armed forces drive an armoured vehicle during a training at a firing range in Donetsk region, Ukraine April 20, 2021 | Reuters

Earlier, news agency Reuters had reported that Russia had relocated 10 Sukhoi Su-24 bombers based in Crimea from the annexed peninsula to reserve air bases elsewhere as part of training exercises, citing the Interfax news agency.

The European Union Aviation Safety Agency had warned air operators of a high risk to civilian aircrafts over Ukraine, reminding air operators that this is now an active conflict zone.

In the bulletin issued early Thursday, EASA said, Airspace and critical infrastructure, including airports, are exposed to military activities which result in safety risks for civil aircraft. In particular, there is a risk of both intentional targeting and misidentification of civil aircraft.

It added: "The presence and possible use of a wide range of ground and airborne warfare systems poses a HIGH risk for civil flights operating at all altitudes and flight levels."

It recommended that, additionally, as a precautionary measure, operators should exercise extreme caution and avoid using the airspace within 100 nautical miles of the Belarusian- and Russia-Ukraine border.