Ukrainian ambassador to Japan poses as Samurai in message to Russia

Korsunsky was appointed ambassador to Japan in April 2020 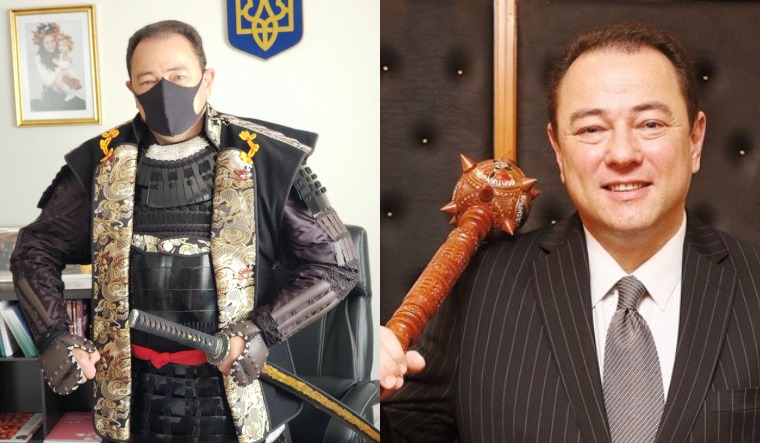 The crisis involving Russia and Ukraine is not only visible in the movement of military personnel of both sides and hectic negotiations.

A parallel front has been opened on social media, with supporters of both sides sharing propaganda and engaging in trolling.

A Ukrainian diplomat on Tuesday adopted a novel method to show his country's defiance of Russia. Ukraine's ambassador to Japan Sergiy Korsunsky on Tuesday tweeted an image of himself as a traditional Japanese Samurai, complete with gloves and a Katana, the traditional curved sword favoured by Samurai.

Along with the impressive image, Korsunsky wrote in English and Japanese "We know what we are fighting for. How about Russia?" By Wednesday morning, Korsunsky's tweet had attracted much attention, earning over 2,000 retweets and in excess of 8,600 likes. The official handle of Ukraine's embassy in Japan shared the image as did many journalists and diplomatic watchers.

Korsunsky was appointed ambassador to Japan in April 2020. He had previously been Ukraine's ambassador to Turkey and also been the country's acting envoy to the US. Korsunsky has also held administrative posts in Ukraine's diplomatic service. According to the country's ministry of foreign affairs, Korsunsky, who holds a doctor of science degree in applied mathematics, has authored more than 320 academic papers and seven books.

Interestingly, the Samurai pose is not the first time Korsunsky posed with a weapon. In October 2020, when he assumed office as ambassador to Japan, Korsunsky posed with what appeared to be a kanabo, a Japanese spiked club. Korsunsky then tweeted, “Hello everyone. Nice to meet you. This is Sergiy Korsunsky. I came to Japan as the Ambassador of Ukraine to Japan. Thank you very much.” The tweet garnered over 16,000 retweets and 45,000 likes!