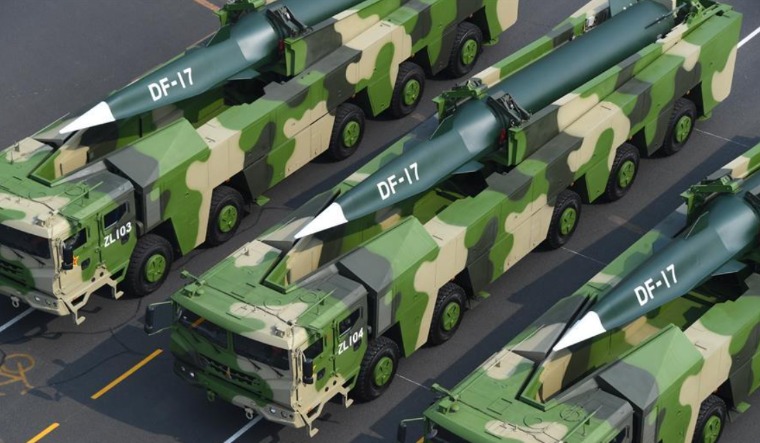 Hindustan Times recently reported that the first Indian S-400 unit would be operational in April and would be deployed in “depth areas to tackle the threat from China”.

The Indian Air Force has previously described the S-400 as a ‘game changer’ given the air defence system's advanced sensors and array of missiles. The S-400 uses four types of surface-to-air missiles, with ranges from 40km to 400km. The missiles can shoot down multiple types of targets such as aircraft, cruise missiles, bombs and some types of ballistic missiles.

The versatility of the S-400 has meant that Pakistan has considered its acquisition by India as a threat, as the system can shoot down aircraft even in Pakistani airspace.

An expert on China's military told Defense News last week that Beijing could allow Pakistan access to hypersonic weapons to counter the S-400. Hypersonic weapons, which fly at over five times the speed of sound, are difficult for most radars to track and existing surface-to-air missiles to engage. Richard D. Fisher is a senior fellow at the International Assessment and Strategy Center. He has testified in the US Congress about China's military advances and written extensively on Beijing's armed forces.

He told Defense News, “It is very likely that, to the degree that China has aided North Korea’s new hypersonic glide vehicle (HGV) missile warhead, it has or will similarly assist a Pakistani HGV, or simply sell the DF-17... Or Beijing now has the option of allowing North Korea to sell its HGV to Pakistan.”

A hypersonic glide vehicle is a type of hypersonic weapon that is mounted on a ballistic missile and released in the upper atmosphere, after which it glides to its target. According to US intelligence estimates, the DF-17 has a range of around 2,500km and moves at between five and 10 times the speed of sound. The Chinese military is believed to have inducted the DF-17 into service.

Pakistani analysts have previously argued in favour of developing hypersonic weapons to counter the deployment of the S-400.

Fisher also noted China could assist Pakistan by providing its upgraded surface-to-air missiles, which could deter the Indian Air Force from carrying out offensive operations. China has purchased from Russia both the S-400 and its predecessor, the S-300 missile system. China has developed indigenous versions of the S-300 called the HQ-9 family of surface-to-air missiles, which have already been sold to Pakistan.

Fisher told Defense News, “Like later variants of the S-300 family acquired by China, the HQ-9 featured a hard-to-jam phased array guidance and tracking radar, and its missile uses an active radar for terminal guidance.”

Mansoor Ahmed, a senior fellow at the Pakistan-based think tank Center for International Strategic Studies, told Defense News that Pakistan could also turn for help to two allies that use the S-400. Ahmed referred to the possibility of military exercises with Turkey and China that “may at least indirectly help identify its [S-400’s] strengths and weaknesses for exploring opportunities to suppress and defeat Indian S-400 systems”. Turkey or China allowing Pakistan access to their S-400 systems would allow Islamabad to develop electronic countermeasures to jam radars or craft specific flight plans for its fighter jets that reduce possibility of detection.