20 ships participated in the drill 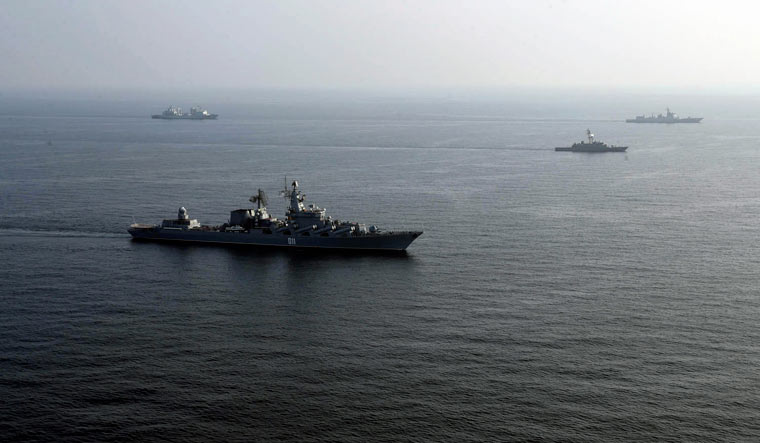 Warships attend a joint drill of Iran, Russia and China in the Indian Ocean | Iranian Army via AP

State TV said 11 of the country's vessels were joined by three Russian ships, including a destroyer, and two Chinese vessels. Iran's Revolutionary Guard was also participating with smaller ships and helicopters.

The report said the maneuvers would cover some 17,000 square kilometers, or about 6,500 square miles, in the northern part of the Indian Ocean, and include night fighting, rescue operations and firefighting drills.

Later in the day, the TV showed footage of a group of vessels sailing in a row and said a total of 20 ships participated in the drill.

It also showed excerpts from practice firing of machine guns in darkness, daytime exercises, Iranian and Russian marines repelling down to a ship's deck and other video.

This is the third joint naval drill of the three countries since 2019. It coincided with a recent visit by Iranian President Ebrahim Raisi to Russia that ended on Thursday.

Improving bilateral relations between Tehran and Moscow will enhance security for the region and the international arena, Raisi said upon returning from Russia on Friday, the official IRNA news agency reported.

Tehran has sought to step up military cooperation with Beijing and Moscow amid regional tensions with the United States. Visits to Iran by Russian and Chinese naval representatives have also increased in recent years.

Iran has been holding regular military drills in recent months, as attempts to revive its 2015 nuclear deal with world powers flounder.

Russia is also at loggerheads with the US and the West over its neighbour Ukraine, where it has sent some 100,000 troops that Washington, Kyiv and their allies fear will be used to invade the country.

Russia on Thursday announced sweeping naval maneuvers in multiple areas involving the bulk of its naval potential over 140 warships and more than 60 aircraft to last through February.

The exercises will be in the Black Sea, the Mediterranean, the northeastern Atlantic and the Pacific Ocean, in addition to the joint exercise with Iran in the Indian Ocean.