Dubbed 'the Slovenian Trump', Jansa is a controversial figure in his country 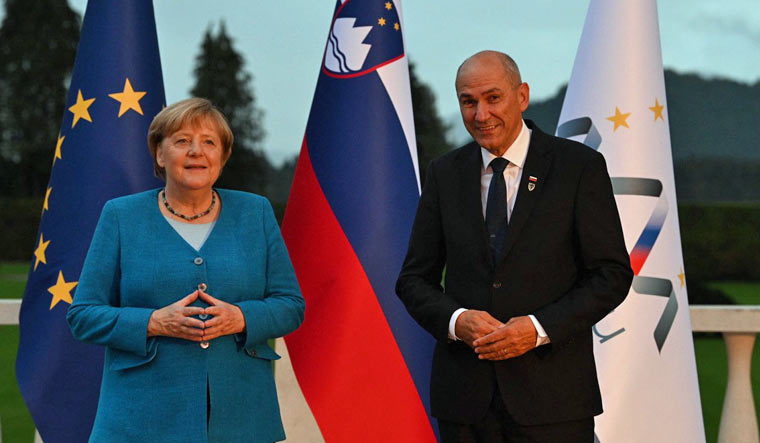 China lashed out at Slovenia’s Prime Minister Janez Jansa for claiming Taiwan is a democracy. The Chinese foreign ministry on Wednesday said it was “deeply shocked” and “strongly opposes’’ Jansa’s opinion, which challenges the one-China principle. The prime minister talked about the issues in an interview with Indian TV station Doordarshan on Monday.

The controversial remarks were made when asked about his meeting with the Indian foreign minister and his subsequent use of two hashtags on Twitter “#SouthChinaSea” and “#Taiwan”.

He said that everybody who knows history knows the “legitimate successor of China” and that Slovenia supports the sovereign decision of the Taiwanese people—either to join China or to live independently.

“They [China] are a democratic country. It is difficult to listen to a capital with a one-party system lecturing about democracy and peace around the world,” observed Jansa regarding his relations with the island. Moreover, he stated China’s opposition to Taiwan’s membership in the World Health Organization is a pity.

He further hinted at the plans to establish a representative office in Taiwan that “will not be the level of an embassy”.

Chinese foreign ministry spokesperson Zhao Lijian said, “The Chinese side is shocked by and strongly opposes the dangerous remarks by the Slovenian leader who flagrantly challenged the one-China principle and voiced support for 'Taiwan independence'.”

“There is but one China in the world and Taiwan is an inalienable part of China’s territory,” he added.

According to The Global Times, Jansa is a right-wing “troublemaker” and a "fringe politician."

From communism to right-wing

Dubbed as “the Slovenian Trump”, Jansa was a communist before turning into a right-wing hardliner. He entered politics in his youth.

Later, he was involved in establishing the Slovenian Democratic Union (SDZ), becoming its first vice-president and later the council president.

He joined the Slovenian Democratic Party (SDS) after the dissolution of the SDZ. He was elected its president in 1993 and has held the position ever since.

Jansa was accused of abusing his power as a defence minister by engaging in illegal arms trafficking and blackmailing individuals. He was discharged as minister in 1994 for his involvement.

The SDS chiefly remained in the opposition till 2004, during which Jansa was charged with political extremism and radical discourse. His rhetoric was nationalistic with verbal attacks which turned moderate in time for the 2004 elections.

Jansa became the prime minister for the first time in 2004. There were many allegations at the time including that he had received bribes from a Finnish defence company Patria.

When he was re-elected in 2013, he was accused of not reporting his assets accurately. This ultimately led to the fall of his government.

In 2013, he was convicted of corruption in the Patria case and sentenced to two years in prison. He spent a few months in prison in 2014 and the conviction was overturned the following year.

In March 2020, he was elected as prime minister again following the resignation of Marjan Šarec.

In October 2021, he sparked criticism for conspiring to discredit the leader of the European Parliament delegation. They visited Slovenia to examine how the nation tackles rule of law, freedom of press and corruption. He has also made several anti-immigrant statements.

Jansa is an active Twitter user, nicknamed “Marshal Twitto”, where he frequently attacks his critics.